Since this is National Flag Week, let's take a look at our United States flag and the history of Flag Day.

On June 14, 1893 Philadelphia observed the first Flag Day. In 1916, President Woodrow Wilson issued a presidential proclamation establishing a national Flag Day to be held on June 14.

To commemorate the adoption of our flag, the Congress, by joint resolution approved August 3, 1949 designated June 14 of each year as "Flag Day" and requested that the President issue an annual proclamation calling for its observance and for the display of the U. S. Flag on all Federal Government buildings. Read the proclamation issued this year by President Barack Obama.

Congress also requested, by joint resolution approved on June 9, 1966 that the President annually issue a proclamation designating the week in which June 14 occurs as "National Flag Week" and call upon citizens of the United States to display the flag during that week. 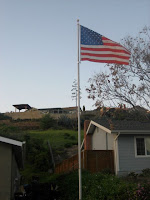 This year the National Flag Day Observance will be held tomorrow, Thursday, June 14. On our street, some of our neighbors have been flying their flags all week long. U.S. flags may come in a variety of sizes, but the look (number and arrangement of stars and stripes) and proportion of each flag remains consistent.

However, a uniform look for the flag was not always the case. Before the Executive Order of June 24, 1912, neither the order of the stars nor the proportions of the flag was prescribed. Instead, the flag maker could decide how what proportions the flag should be and how the stars would be arranged. As a result, flags from this period sometimes have odd proportions and unusual arrangements of the stars. For the most part, flag makers used straight rows or stars and proportions similar to the ones later adopted officially. Read more at usflag.org.

The standard proportions of the flag today are:

If you have advanced students, you could have them calculate the proportions of a flag that's 6 inches wide (or whichever width you choose), using these standard proportions. Then they could cut out a flag of that size from white paper and a proportional Union from blue paper, glue them together, and add stripes and stars.

Some important acts affecting the flag of the United States include the following: 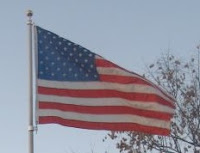 Today each U. S. Flag has 50 stars—one for each state of the Union—and 13 stripes (seven red alternating with six white stripes)—one for each of the original thirteen colonies. The red color symbolizes hardiness and valor; white symbolizes purity and innocence; and blue symbolizes vigilance, perseverance, and justice.

On June 14, 1923, the first National Flag Conference was held in Washington, D.C. to establish a set of rules for civilian flag use. The U.S. Flag Code, first published in 1923 and adopted by Congress in 1942, is based on the belief that the American flag “represents a living country and is itself considered a living thing.” In 1989 the U.S. Supreme Court struck down flag-protection laws as violations of free speech. However, the Flag Code is still maintained as a code of etiquette, enforced by tradition rather than by law. Read more at the National Museum of American History.

Here's a star maze, compliments of Excel Math, you can download and print for your students in honor of Flag Day. Learn more about Excel Math, proven math lessons for elementary students in Grades K-6 on our website.