The summer solstice -- the astronomical beginning of summer in the Northern Hemisphere — took place one week ago today at 7:09 p.m. EDT on June 20. That made it the longest day of the year north of the equator. From now until December, the days will gradually get shorter, though not necessarily cooler.

According to weather reports, the U.S. has had the warmest spring since record-keeping began in the 19th century. June 2011 to May 2012 marked the warmest 12-month period of any 12 months on record for the continental United States.

In Excel Math, students learn how to compute the date within the month, determine elapsed time, create graphs, and calculate expected numbers based on probability. Here's an example of problems using probability from the Excel Math Grade 6 Student Worksheet Lesson 133. Click here for a PDF file you can use with your students:
In this worksheet, students learn how probability can be used to estimate future events. Discuss the first question: "Based on the past 8 years of experience, the probability that an orchid will bloom in June is 1 out of 6. Knowing this, if you have 12 plants, is it probable that you will have a flower in June?"

The problem states there are 12 plants so we would multiply one-sixth by 12, and the problem would be written:

So it would be probable that 2 of the 12 orchids would bloom in June. You can help the students understand that probability does not guarantee an outcome. The answer doesn't mean 2 of the 12 orchids will definitely bloom in June, but it is probable that you will have two flowers in June. Orchids blooming in June is an event that occurs fairly regularly. For this lesson, problems 3-6 are read aloud by the teacher. They do not appear on the Lesson Worksheet. (The answers are given below.)
Another event that occurs regularly is the earth's orbit around the sun. Earth, turning on its axis as it circles the sun, is tilted at an angle of 23.5 degrees relative to its orbit. Whatever the season, the axis points the same way, with Polaris, the North Star, hovering over the North Pole.

June 20 was the day that the axis, as seen from the north, pointed as much toward the sun as it will all year, and appeared at its highest in northern skies. So Chicago and New York, for instance, got more than 15 hours of sunlight, compared with 9.1 hours on the winter solstice Dec. 21. And everything north of the Arctic Circle got 24 hours of daylight that day -- compared with round-the-clock darkness six months from now. While the summer solstice is happening in the Northern Hemisphere, the winter solstice occurs simultaneously in the Southern Hemisphere. Around December 21 the solstices are reversed and winter begins in the northern hemisphere. Read more at abcnews.go.com.

This year's summer solstice took place a day earlier than it's been for the past three years, due to the fact that 2012 is a leap year. This February got an extra day, to keep our calendar year of 365 days in sync with the astronomical year, which is about 365.24 days. Read more about leap year on our March 14, 2012 blog post.

In general, the exact timing of the summer solstice changes from year to year, "but there's a bigger jump when you have a leap year," explained Mark Hammergren, an astronomer at the Adler Planetarium in Chicago.

The solstices are the results of Earth's north-south axis being tilted 23.4 degrees relative to the ecliptic, the plane of our solar system. This tilt causes different amounts of sunlight to reach different regions of the planet during Earth's year-long orbit around the sun.

On June 20 the North Pole was tipped more toward the sun than on any other day of 2012. (The opposite holds true for the Southern Hemisphere, where June 20 marked the winter solstice, the shortest day of the year.)

At high noon on the summer solstice, the sun appeared at its highest point in the sky—its most directly overhead position—in the Northern Hemisphere. That doesn't mean the sun was exactly overhead at noon for everyone, said Cornell University astronomer James Bell.

It depended on the viewer's latitude—the sun will shine down directly overhead at noon only along the Tropic of Cancer, an imaginary line that circles the planet at about the latitude of Cuba.

Earth's oceans and atmosphere act like heat sinks, absorbing and reradiating the sun's rays over time. Even though the planet is absorbing lots of sunlight on the summer solstice, it takes several weeks to release it. As a result, the hottest days of summer usually occur in July or August.

"If you think about turning up an oven, it takes it a long time to heat up," explained Robert Howell, an astronomer at the University of Wyoming. "And after you turn it off, it takes awhile for it to cool down. It's the same with the Earth."

Another popular misconception, Adler's Hammergren said, is that during the summer—and especially during the summer solstice—Earth is closer to the sun than at other times of the year. In reality, the tilt of the Earth has more influence on the seasons than our planet's distance to the sun.

Here in San Diego, the winter solstice marks a popular time of year to hike Cowles Mountain (pronounced "coles"), part of Mission Trails Regional park. From the eastern horizon, at dawn on the days surrounding the solstice, a peak splits the rising sun so it appears for a short time to be divided in two. This part of the mountain was a Kumeyaay Winter Solstice observatory site. You can see hikers start up the mountain with their flashlights before dawn on the days around December 21. Read more about hiking up Cowles Mountain on our February 2, 2012 blog post.

Here are the answers to the Grade 6 Student Lesson Sheet shown above: 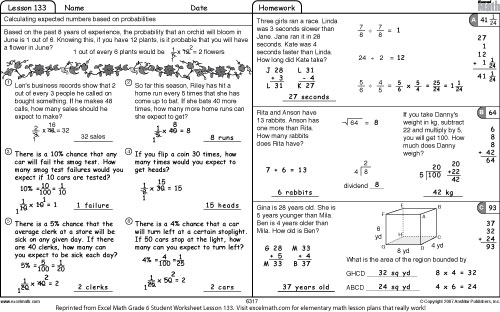 Since Excel Math uses a unique spiraling strategy, students get more out of the lessons when  you teach multiple lessons sequentially within each grade level. This process gets the concepts into your students' long-term memory. Learn more about how Excel Math gives students a strong foundation in elementary math at excelmath.com.
Posted by Unknown at 5:00 AM