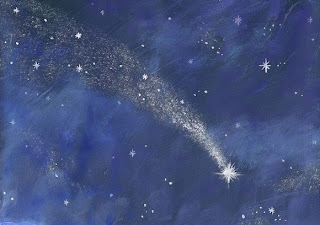 During the early morning of August 12, we will have a chance to see a spectacular meteor shower—the Perseids. In the dark of the night we will be able to see thousands of these brilliant falling stars. The skyshow will continue until August 23 but will become less frequent starting August 13 and will drop to just five shower members per hour by the weekend of August 18. These meteors can be seen most clearly during the early morning hours of August 11 and 12. Astronomers are predicting 10-25 Perseid meteors an hour so grab a friend and check it out! But be sure to be patient, get comfortable, and watch as long as possible for the best show.

In Excel Math, we help students develop higher-order thinking skills so they will have a love for math and want to be life-long learners. Watching the meteor shower this weekend with your family and friends (and reading a bit about it beforehand) is a just one fun way to do just that.

A meteoroid swarm is sometimes referred to as a "flying gravel bank," though it is not a very compact one. Each August the Earth, following its normal orbit around the sun, intersects the orbit of dust particles left behind by comet Swift-Tuttle. Read more at www.livescience.com.

These dust particles—all of them tiny specks—become extremely hot as they hit the Earth's upper atmosphere at speeds of 20-50 miles per second. Each hot particle generates a streak of light before the particle is obliterated. These swift streaks of light appear to dart across our northern skies from their namesake constellation, Perseus, from late July through most of August. See photos: Amazing Perseid Meteor Shower Photos

The Perseid meteoroids may be anywhere from 60 to 100 miles (96 to 160 kilometers) apart at the densest part of the swarm. Most meteors are smaller than a grain of sand, so almost all of them disintegrate and never hit the Earth’s surface. That's what's so amazing about the shower that will appear in the skies on August 12. This year, the Earth is expected to encounter the "core" of the Perseid swarm, where meteoroid concentration is densest, around Sunday. Read more at www.livescience.com.

There are several meteor showers during the year. For people on the West Coast of the U. S., the advantage of viewing the Persieds is that they occur in the summer season during clear, relatively warm weather. The moon will be almost new, so the sky will brighten only slightly after about 2 a.m. The expected peak of the shower is before dawn on August 12. This is when the Perseids put on their best show as the meteors appear to diverge from a patch of sky near the Double Cluster in Perseus.  Read more at the American Meteor Society.


The hour before the first morning twilight should produce the best Perseid rates, which should be almost 25 per hour on Saturday morning for observers with transparent skies. Those who have to view under hazy skies will probably only see half this amount. On Saturday evening Perseid rates should be 5-10 per hour. On Sunday early morning the moon will have moved eastward in eastern Taurus, some 10 degrees below the bright planet Jupiter. At that time the moon will be 25% illuminated. It will be 40 degrees away from the Perseid radiant. According to Robert Lunsford at the American Meteor Society, "observers with clear, transparent skies, may see rates of nearly 40 Perseids per hour Sunday morning." Read more from Robert Lunsford here.


Perseus was the first of the heroes of Greek mythology whose exploits in defeating various archaic monsters provided the founding myths of the Twelve Olympians. Perseus was the Greek hero who killed the Gorgon Medusa, and claimed Andromeda. He had rescued her from a sea monster sent by Poseidon to retaliate against Queen Cassiopeia, who declared that her daughter, Andromeda, was more beautiful than the Nereids.

If you want to celebrate the meteor shower with a party, the Oregon Museum of Science & Industry (OMSI) is holding an annual public "Meteor Party" complete with telescopes set up for attendees to use. You can also contact the Seattle Astronomical Society about their August star parties at Goldendale and Snoqualmie Point Park. The times and dates for best viewing are good for all locations in North America. For Europe and Asia, the moon’s location will be slightly different but the general circumstances are similar. If you live south of the equator, you'll be at a disadvantage since the Perseids are not well seen in the southern hemisphere.

According to Robert Lunsford, "Most people are going to be disappointed with the show. There will be times when no activity will appear for 5 minutes and then 10 meteors will suddenly appear in the same time span. You need to get comfortable and watch as long as possible so that you may witness the peaks of activity along with the droughts. Really serious folks will hop in the car and head for dark skies away from the city." Check your local Astronomical Society website for more information.

New to Excel Math? Take a look at the lessons for Kindergarten through Sixth Grade plus lots of math resources at excelmath.com.
Posted by Unknown at 5:00 AM