Roman Numerals and the Olympics

Many of us were surprised to discover that during the first four decades of Olympic events, the Olympics gave official medals for painting, sculpture, architecture, literature and music along with the athletic competitions. The majority of these medal-winners were works of art inspired by the athletes. This year marks the 100th anniversary of the first artistic competition. Even so, most of us have been unaware that the arts, as well as athletics, were a part of the modern Olympic games, almost from the start. Read more at Smithsonianmag.com/art-culture

Roman numerals were used until the 13th Century AD when Fibonacci published his Liber abaci, which means The Book of Calculations. This book showed the practicality of the new Arabic numbering system by applying it to bookkeeping, conversion of weights and measures, the calculation of interest, money-changing, and other everyday applications. Read more on our previous blog post about Fibonacci.

Students today may not be as familiar with Roman numerals as they were in previous generations. However, Excel Math students are introduced to Roman numerals in fourth grade. Here's a worksheet explaining how to recognize Roman numerals (the answers are shown below):
The Romans didn't have a symbol for zero as we do with Arabic numerals, and numeral placement within a number could sometimes indicate subtraction (if the smaller number was placed before the larger one) rather than addition (if the smaller number came after the larger one). So the Roman numeral I = 1 and V = 5, IV = 4 (5 - 1), and VI = 6 (5 + 1). L = 50, C = 100, D = 500, and M = 1000. 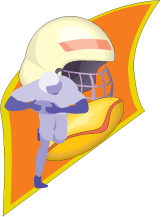 In the 2012 Superbowl XLVI the Giants defeated the Patriots by the score of 21–17. The game was played on February 5, 2012, at Lucas Oil Stadium in Indianapolis, the first time that the Super Bowl was played in the state of Indiana. Can you decipher the Roman numerals and then calculate what number the 2013 Super Bowl will be?

What number will the next Summer Olympics be in Roman and Arabic numerals? Here are the answers to the Roman numeral problems on the Excel Math worksheet shown above: 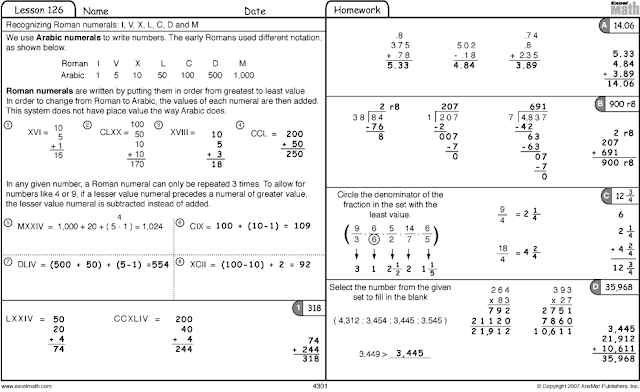 Learn more about how Excel Math can work for your students at excelmath.com. Excel Math is fully aligned to the Common Core and to state standards. Download correlations.


New to Excel Math? Learn how to get started.

You may also like these articles:
Creating Electronic Math Flashcards
Thank You, Teachers!
May Day Math
Seven Steps to Successful Math Students (& Parents)
Posted by Unknown at 5:00 AM