Mapping Out the Compass Rose 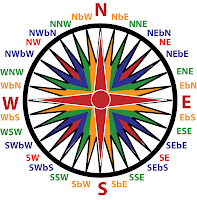 The compass rose has appeared on charts and maps since the 1300's when the portolan charts first made their appearance. The term "rose" comes from the figure's compass points resembling the petals of a rose. Can you see the resemblance?

The 32 points are therefore simple bisections of the directions of the four winds (but the Chinese divided the compass into 12 major directions based on the signs of the Zodiac). North is usually at the top, and each direction is abbreviated using its first letter (N for North, E for East, etc.)

The compass rose above is divided into subsections so NE is northeast, NNE is north-northeast, NbE is north by northeast, etc. One of the first things western apprentice seamen had to know were the names of the points.

Here are some simpler but very colorful versions of the compass rose: 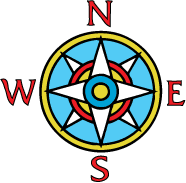 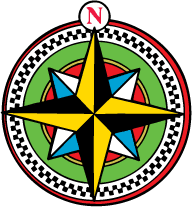 You may also like these articles:
Creating Electronic Math Flashcards
Thank You, Teachers!
May Day Math
Seven Steps to Successful Math Students (& Parents)
Posted by Unknown at 5:00 AM