On July 4 we celebrate our country's birthday with fireworks, picnics, and activities with our families and friends. Some of the streets around our city are lined with United States flags in honor of Independence Day.

Here's a fun craft — Fourth of July rockets. Let your students make some rockets from paper scraps and recyclables (cardboard bathroom tissue tubes, drinking straws, and tissue paper). Then use the festive rockets to decorate your classroom. See complete instructions and photos at http://to.pbs.org/19CWCCv

Have each student print a math equation on the rocket and print the answer on a strip of paper. Let the child fold the paper and slip it into the rocket tube. Have your students trade tubes and see who can solve the equation first. 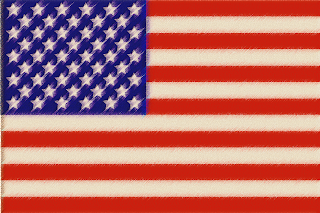 Also have your students make paper flags from white construction paper. Glue red paper strips for the stripes and a blue square of paper in the top left corner for the star background. Let the students add white star stickers or use chalk or white crayons to draw stars.

Talk about the United States flag as the students look at your class flag. Or show them the picture of the flag shown here. Ask them to explain why there are 13 stripes and 50 stars. See if the class can name all 50 states or the 13 original colonies.

Let your students create math equations that total 50 and 13 using a variety of operations (addition, subtraction, multiplication, division) and print them on the back of their flags. In Excel Math, we help students understand and practice math skills so they become confident and successful in mathematics. Learn more about our unique spiraling system: http://www.excelmath.com/tour/tour03.html.

Your students may not realize that "the star-spangled banner" refers to our flag. Discuss other banners your students may have seen. Point out that our flag is a banner with stars and stripes. In 1814, Francis Scott Key wrote the poem, Defense of Fort McHenry. The poem was later put to the tune of The Anacreontic Song by John Stafford Smith (watch the Georgia Tech Glee Club perform a rousing version of that song below). The song was modified somewhat, Keys words were added, and it was retitled, The Star Spangled Banner. Congress proclaimed The Star Spangled Banner the U.S. National Anthem in 1931.

Like most people, you may be most familiar with the first verse of  The Star Spangled Banner. Did you know it has four verses? Here are the first two:

O say, can you see, by the dawn's early light,
What so proudly we hail'd at the twilight's last gleaming?
Whose broad stripes and bright stars, thro' the perilous fight,
O'er the ramparts we watch'd were so gallantly streaming?
And the rockets' red glare, the bombs bursting in air,
Gave proof thro' the night that our flag was still there,
O say, does that star-spangled banner yet wave
O'er the land of the free and the home of the brave?

On the shore dimly seen through the mists of the deep
Where the foe’s haughty host in dread silence reposes,
What is that which the breeze, o’er the towering steep,
As it fitfully blows, half conceals, half discloses?
Now it catches the gleam of the morning’s first beam,
In full glory reflected now shines in the stream,
’Tis the star-spangled banner - O long may it wave
O’er the land of the free and the home of the brave!

New to Excel Math? Preview elementary math lessons that really work for Kindergarten through Sixth Grade on our website: www.excelmath.com.

Summer Solstice: Let the Sun Shine!
School's Out for Summer
Staying Fit Over the Summer Break