What does this number 401(k) mean anyway?

401(k) is a section of the US Internal Revenue tax code. It defines a retirement savings plan which corporations may offer to their employees. Employers may contribute matching funds to the account. Income taxes that would normally be due on the salary put into the account (plus any employer contributions or earnings) are deferred until withdrawals are made, years later. The 401(k) scheme was set up to encourage people to save for their retirement, and to give employers a cheaper option than a fully-funded pension plan.


The Employee Benefit Research Institute (EBRI) and the Investment Company Institute (ICI) track the funds invested in 401(k) accounts. They collect figures with the cooperation of insurance companies, investment firms and mutual funds. Their latest 2009 report was published just a few days ago and contains information on about half of the total participants in 401(k) plans.

You mean half the 401(k) retirement accounts don't have enough money in them to buy a tiny little red Chevy Aveo?  That's right.

Let's look at the definitions for average and median.

Average is calculated using division. We take all the money (dividend) and divide it by the number of accounts (divisor) to get a result (quotient). This is the average balance.

Median is found by ranking. We take all the individual savers and their account balances, and rank them in order from smallest balance to largest. Then we count along that line of savers until we get to the middle person. The balance of the person in the middle is the median balance. 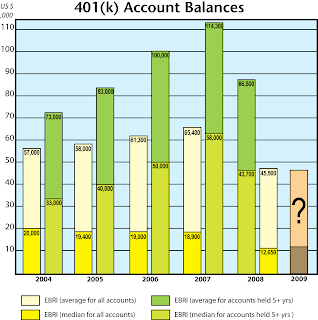 If you are a visual person, here are some bar graphs for you to look at. Click the graphs to get a larger version that you can more easily study.

The question mark asks what will happen at the end of this year? Will the numbers go down or up? 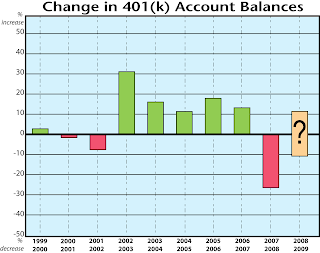 Over the past decade, the 401(k) total balance has fluctuated between growing and shrinking. Here's a chart showing you how the money pot has changed size each year. Remember, these numbers do not show you earnings in individual accounts, they show how big the total is.

Here's the final chart. It shows the distribution of account balances. The first tall bar means 47% of the savers in the country have less than $10,000 in their accounts. Although the median age of that group is around 30, there are plenty of older people with less than 10K in their accounts! 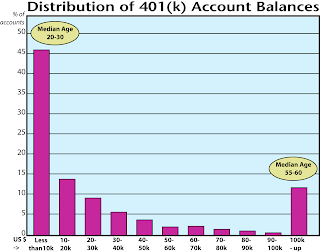 The final column shows that 12% of the savers in the country have more than $100,000 in their accounts. The median age in this group is in the late fifties. So what does this chart tell us?

That's the median, but not the bottom line!

Only one out of every six dollars of retirement assets
(pension, after-tax savings, real estate, collectibles, etc.)
are held in these 401(k) retirement accounts.

Posted by Excelmathmike at 9:33 AM