If it weren't for electricity we'd all be Googling by candlelight

I saw a newspaper article today on Iceland. They have lots of electricity generated by geothermal (underground hot water) sources. It's very very cheap. They want to sell more of it, but electricity is harder to export than oil or gas.

It's too expensive to pull giant extension cords across the ocean, and batteries the size of oil tankers aren't cost-effective yet either, so they're trying to get the biggest electricity users in the world to come on over to Iceland. Sounds reasonable.

Who are the biggest electricity users in the world? Aluminum smelters and data centers were identified as two industries the Icelanders are courting.

That made me wonder - who uses the most energy, smelters or data centers? Alcoa or Google?

2008 year-end results showed Alcoa sales of $26.9 billion and Google sales of $21.8 billion. Both are in the twenty-billion range. They are BIG companies.

GOOGLE electricity use
Google doesn't release information about its energy use, claiming it's a competitive secret. But its server farms are usually placed next to hydroelectric plants, confirming that fact that they are massive energy users. And we do know some things, such as Google scientists telling us a typical search amounts to 0.0003 kWh of energy, or 1 kJ (kilo-Joule).

To estimate total Google's energy use we could multiply the number of searches (est. at 300 million per day in late 2009) times the amount of energy per search, to learn:

That's 3.3 billion kWh but of course Google does lots more than just searching so probably their use is much higher.

Notice no data center on Iceland, up there in the North Atlantic!

ALCOA electricity use
Alcoa's a bit more open. This table shows their purchases of electricity : 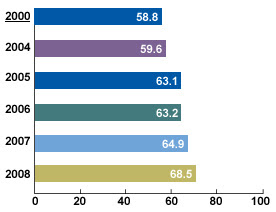 This is billions of kWh and only includes the power they buy from external sources.

Let's see if we can calculate their possible energy use just in smelting raw aluminium. (Of course the company does many more things.)

Alcoa says their high-efficiency smelters consume only about 14 -15 kWh per kilogram of output.

Alcoa's current maximum global output capacity is 4.5 million metric tons per year, but they use only 3.5 of that.

A metric ton (tonne) is 1 thousand kilos. The math is simple. These are large numbers though, so let's see if we can keep it straight.

The 52.5 billion kWh which roughly represents their smelting consumption. It's in the right ballpark, when compared with their purchase of 68.5. The rest they generate themselves.

TOTAL USA electricity use
To put this in perspective, the US as a whole generated approximately 4000 billion kWh of electricity in 2008.

Alcoa uses electricity equal to about 8% of the total electricity consumption of the US (of course their smelters are around the world, and so are their sources of electricity).

So far Alcoa is the winner, but I'm not confident about the Google numbers. One thing's for sure about math - you can crunch the numbers all you like but if you don't start with the right ones, you don't get the real answer.
Posted by Excelmathmike at 1:04 PM