Order of Symmetry is not a phrase we use very often. In fact, it's a bit of a struggle for us to get this across clearly in our math curriculum. People confuse it with a Line of Symmetry.

Rotational Symmetry is used to describe the number of times that a shape can be overlaid onto itself during a complete turn around its central point. (On the following illustrations, a corner is colored so you can watch the rotation.) 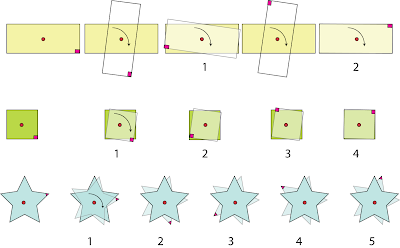 This particular star can be fitted over itself 5 times in a turn. It has rotational order of symmetry 5. Not all stars are symmetrical in shape; not all have symmetry.

How many orders of symmetry does a circle have? Lots? or none? It has an infinity.

Lines of symmetry exist when you can fold a shape over a line and the folded parts lay right on top of each other. Here's one through the middle of a music player.

How and why did this come to my mind today? Gosh, it's hard to say where the ideas come from. I was reading about states and types of matter.

There are the big 2 - organic and inorganic.

But now those pesky scientists have changed their minds again - recognizing many crystalline states between liquid and solid. When some substances are magnetized or in a non-magnetic condition, or if they are conducting electricity or not - they grow crystals with different sorts of shapes and symmetries.

That's interesting and irritating! When we are classifying things we want them to remain constant under all observable conditions, not shape-shifting whenever they are subjected to outside influences!

Here are some quasicrystals:

It fouls up our classification system if solids can change the shape of the crystals that compose them!

Of course then we have another set of categories: animal, vegetable, mineral.

But where do slime, diatoms, lichen and fungi fit? The classification task is very complex out at the fringes! Those scientists have also given up using just those 3 categories, and have added others too confusing to explain here. As a sample,

Cellular slime molds spend most of their lives as individual unicellular yet complex microorganisms, but when a chemical signal is secreted, they assemble into a cluster that acts as one organism (protists).

These unicellular protists live on their own most of the time (perhaps in tiny singles apartment complexes) but when a signal given, they link up (like the Borg) and operate as one organism. Much like those quasicrystals, but alive. Sort of. In a science-fiction sort of way.

What is the order of symmetry for a cluster of protists? I have no idea.

At least people are fairly consistent. When your mom says "Stay still! Stop wiggling your foot!" she doesn't have to add "and stop growing new arms!". 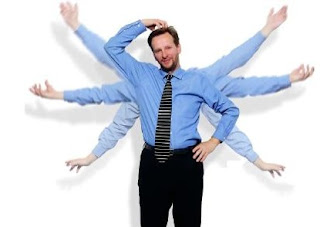 Posted by Excelmathmike at 1:19 PM