I saw a word for the first time today. It might have been coined about 35 years ago.

It literally means counting badly, or perhaps in a more politically-correct phrasing, difficulty with calculations - thus resulting in difficulty learning or doing math.

Here are a few things a person with dyscalculia might experience:
Naturally this interested me, because this blog is about how we do those things as adults. Most people have little trouble with these maneuvers, but about 5% seem to suffer from some impairment.

Next I read about researchers in Oxford who announced that they've put electrodes on subjects' heads and passed a small electric current through the skin. In more precise terms - transcranial direct current stimulation. With a very small sample (15) group they found when the current is applied in one direction, math skills were enhanced; the other direction retarded math ability. 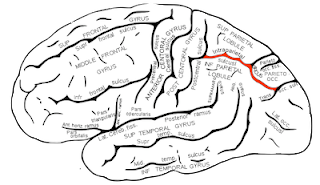 Here's a drawing of the brain from Wikipedia, with red indicating the area where we think math skills originate. This is where they applied the electrical current. A BBC newsman volunteered to do the same experiment - he reported that he neither felt the electrical stimulation, nor improved in his math abilities. That caused him to raise the question himself  "Was there anything in there to be stimulated?"

I think it would be safe to say there needs to be a lot more testing on this concept before we know this has any advantage or utility. And whether it is safe to try it at home. The full report will not be published until later in November.

However, I did see one article which suggested math-test-taking, over-achieving students might try it as an alternative to studying, just as over-competitive athletes take performance-enhancing drugs.

Which would you prefer? Hit the books, or throw the switch? 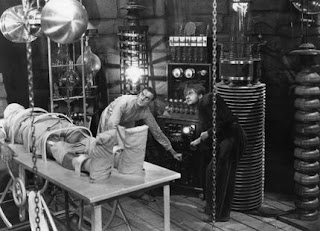 We could offer an optional electrical adaptor and headset with all Excel Math purchases!

Posted by Excelmathmike at 11:48 AM