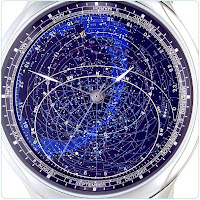 A few days ago I stated that most of our units of time are related to the regularly-observed movements of heavenly bodies.

Today let's have a look at these units. Let me add at this point that I am not going to explain the Citizen Astrodea watch shown here.

And we'll ignore a common unit called the millisecond or New York Second  - the interval of time between a traffic light turning green and the New Yorker behind you honking his horn!

As with many issues we investigate in this blog, of course there are weird time exceptions:

Leap Seconds account for 2 milliseconds per day slowing in the earth's rotation. Since we started using the Cesium clock, seconds are stable. But since the earth is slowing we have to adjust the time occasionally. A "leap second" is added to or subtracted from our clocks by the International Earth Rotation and Reference Systems Service.

Equation of Time reflects irregularities in the sun's path and the rotation of the earth. Time on a sundial and time shown on a clock can vary across a range of 30 minutes throughout the year. 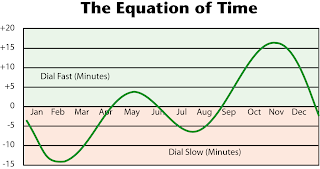 Terrestrial Time is essential for astronomers. Because time is related to rotation, the distance of the astronomer from the center of a planet will change the time (for example, sea level vs the top of Mauna Kea in Hawaii). To resolve this, astronomers use a constant figure - International Atomic Time + 32.184 seconds. Another alternative is to utilize Geocentric Coordinate Time, which is the time at the center of the earth.

You can see some time variations displayed on a very few, carefully-constructed computer clocks. Click on the link to see an example. To make this one work for your time zone, uncheck the RUN box, select the city closest to you (or input your coordinates) and check RUN again.
Posted by Excelmathmike at 9:37 AM