How Do We Know Whooo is making that noise?

Sound consists of traveling waves of alternating compression and rarefaction in an elastic medium (such as air), generated by a vibrating object (sound source).

What is the most remarkable sound you hear on a regular basis?

(Don't say the sound of silly questions being asked by the Excel Math blog, because these are silent!)

I suppose it depends on where you spend most of your time. In my neighborhood, it seems like a tie between non-stop dog barking and airplanes departing from the airport. But there are birds out there too.

Last night, at dusk, I heard a very unusual noise. Looking up and squinting into the dark, I could just make out a pair of hawks circling and crying to each other. Are they mating? Just saying Good Night?

We've lived in the same neighborhood for 20 years, and have been privileged to see families of hawks almost every year, despite losing some of the trees in which they nest. I'm not equipped with bird-watching camera lenses, but here are a few images:

Click here to hear them.   Earlier this week I found a really neat site called NatureSounds run by Doug Von Gausig. He's been recording birds and other sounds around the Southwest for a long time. That's where the hawk cries came from.

This has raised questions in my mind:
Are these even math questions? Do they involve frequencies, vibrations, speed of sound, etc.?  Yes, indeed they do. It's math alright. So what do math people do (versus simple bird-ologists)?

They record the sounds using a parabolic (math) microphone. Then plot (math) the sounds onto a graph (math) and then analyze (math) them to see if you can learn more. This is called a Sound Spectrogram (math).  Here's what a Barn Owl's song looks like. 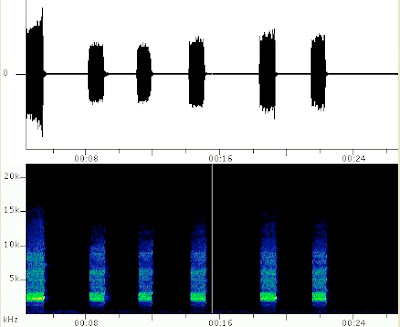 Since most of us like to hear birds, we can go to Cornell's Sound Archive and learn as much or little as we want about sounds from their millions of recordings. Or just click my local owl to hear him. 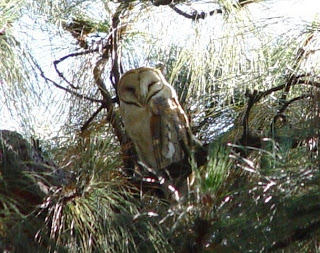 Whoo's really excited about bird songs? Here is a page with hundreds of links to bird song recordings.
Posted by Excelmathmike at 8:35 AM