How Sweet It Is?

There's a worldwide sugar shortage. Almost. Egypt has enough. America is ok. China has plenty and apparently the European Community is swimming in the stuff. But the rest of the world is short. 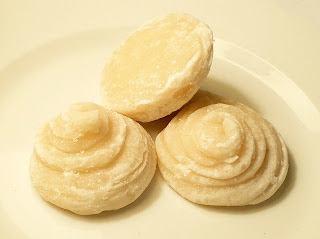 You might say sugar is a luxury, but it's also considered a primary source of calories. It's an ingredient in bread and other staple foods. So we have a problem if most of the world is short on sugar this year.

Alternative sugar sources include sugar palms, agave nectar, maple syrup, honey and other natural sugars. But these options combined are not enough to make up for the expected 2010 shortfall.

NOTE: I am excluding high fructose corn syrup and chemical sweeteners from today's discussion, even though some of them are called "natural."

Is it a math question? Or one of politics, intrigue, chemistry and crops? Yes is the answer to all the questions. 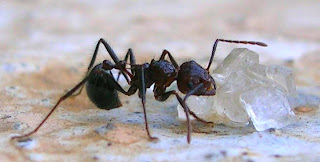 This was set up to protect sugar producers in other areas of the world. Negotiators didn't foresee a season when all other production combined would not be able to produce enough sugar to meet demand.

There are other consumers of sugar besides people, too, such as this ant!

As a result of fears about prices, they have risen  150% in one year to 29.82 cents per pound in New York's trading centers.

Will this hit us in the pocket? Will sugar cause our cost of living to rise?

Australians don't think so. They have lots of sugar, producing about 4.5 million tonnes a year and exporting most of it.

The average Aussie eats about 100 lbs (45 kg) per year. That's in raw form, packaged foods, soft drinks, etc. The wholesale cost of that sugar is now $25 per year ($2 per month) up from perhaps $15 a year ago. Even if it doubled in price, sugar isn't that big a cost for people in developed countries.

China sold 852,000 tonnes of sugar in the last month to supply countries in SE Asia, from a total crop estimated at 12,000,000 tonnes. Its prices in the three recent sales were around US $700 a tonne.

Notice my use of tonne. That's a metric ton. One thousand kilos. That's 2205 lbs, versus an "American ton" of 2000 lbs. So how much per pound is that Chinese sugar? Is the Chinese price above or below the NY price?

Notice how many numbers there are in this story? We'd be lost without a basic knowledge of math! 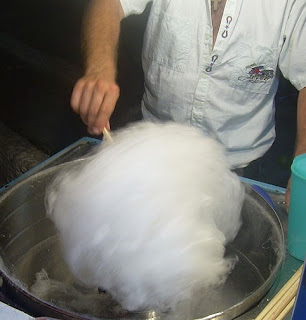 And we would be lost without sugar. Of course, I know lots of people eat too much sugar, especially in the United States. Or perhaps more accurately, you could say we eat too many sweetened foods.

My preference is to completely avoid all processed and packaged foods, and soft drinks. I have to add sugar myself if I want any. That way I can keep track of my sugar consumption, and enjoy a cotton candy at the county fair.

This photo shows a man making a fun treat originally called Fairy Floss. The process of spinning sugar into a fluff was developed in 1897. It was renamed Cotton Candy in the Twenties.
Posted by Excelmathmike at 10:25 AM