This past week I have been reading about Malcolm Muggeridge, an English journalist for much of the twentieth century. His diaries tell of living in Moscow in 1932. One line he wrote stuck in my mind,

Mr C proudly told me he ate his weight in chocolate every year ...

Well. That means hundreds of pounds of chocolate a year. Let's say he weighed 183 lbs - that would be half a pound of chocolate a day! Obviously Mr C didn't have a problem with guilt. Or his doctor. Or perhaps he didn't care. When I described this to my wife, a real chocolate lover, she said,

I decided to look it up. Modern chocolate is around 150-160 calories per ounce! 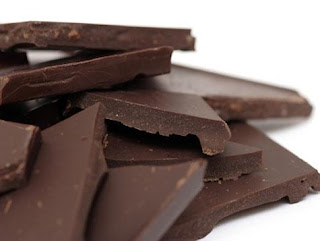 That's about half the total recommended caloric intake per day for an adult, but then we don't know exactly how large Mr. C was, or how much work or exercise he did.

In my research I discovered there are many kinds of chocolate. We're going to assume Mr. C ate dark European chocolate, because of the time and place where he lived. Let's see what the nutritional components are for chocolate. The values shown are possible percentages by weight, not percentages of your daily recommended intake.

Notice these numbers do not add to 100%. Hmmmm

I noticed one interesting fact while researching this - European chocolate is only 60 calories per ounce. That means his intake of calories could have been much less back then compared to eating chocolate today: 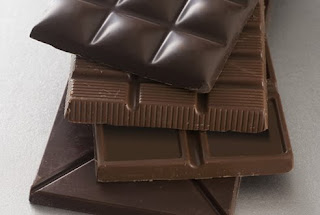 In addition to his calories, Mr. C was getting anti-oxidants, theobromine, phenylethylamine, caffeine, serotonine, vitamins and minerals.

The fat he was eating was from cocoa butter, which is made up of stearic acid, oleic acid, and palmitic acid. All of these are basically neutral as far as cholesterol levels go, as they are plant and not animal-based fats. Here's a look at the makeup of a cocoa bean, which is used to make chocolate. This comes from Hershey.

If you like chocolate, you could eat a dark chocolate most often, and use sweetened, milk and white chocolates as treats, NOT a primary food group! :-) 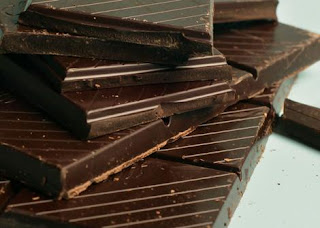 PS: No source recommends eating the equivalent
of your weight each year of any single food!
Revised  3-2-2010
Posted by Excelmathmike at 2:27 PM