It's foggier today than yesterday. Visibility has decreased. Bear in mind this photo was taken around 8 am and sun rise was more than an hour ago. 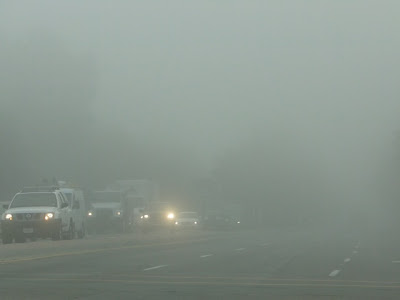 All the cars and trucks visible in the oncoming lane are white or grey. NOT very visible! Yesterday we mentioned how color plays a part in visibility to human eyes, even if colors are NOT considered by the visibility measuring machines used at airports. I suppose it's because pilots are trying to see things that are very large whose color we can't easily change (the ground, a building or a mountain).

In contrast (sorry for the pun) we as drivers are trying to get from A to B in the fog. Innocent pedestrians, bystanders and highway road workers are trying not to be run over by us, but they don't often carry lights to show their presence. So they rely on other means. Like colors and reflective stripes. Here are a couple shirts and a cap in high-visibility colors. 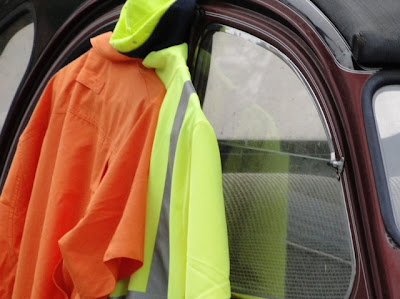 In some countries, the greenish-yellow shirt must be worn if you are driving a truck, because you are likely to stop on the road edge. I bought this one in Denmark. 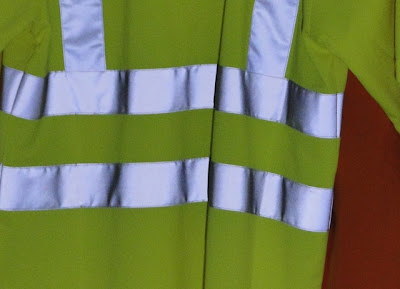 Although the orange shirt looks pretty bright in the sunlight, by comparison it's quite dark in this photo. You can see the 3M Scotchlite™ reflective material is starting to do its stuff in this photo. It's even more prominent in the photo below. Notice that the orange appears to be almost black. 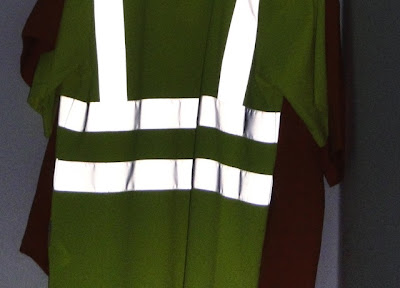 Why the difference? I took the two photos at the same time, in the same place, with the same lighting. And yes, I cropped the first one a bit too. Since we are doing this blog to demonstrate how useful elementary math can be, I'll do a diagram for you. All I did between the two photos was to lower the camera by 18 inches. My flashlight was 6 inches off the floor.

Camera 1 took the first photo, and Camera 2 the second photo. Notice the great increase in reflectivity!

Unlike a light bulb that emits light in multiple directions, reflective film is flat and reflects the light directly back to its source. So the closer your eyes (or the camera) are (vertically) to the source of the light, the more light will come back to you and the brighter the material appears. Since it's made for roadside use and much greater distances, the photos in my hallway make the angles a bit exaggerated.

Our vertex A is at the surface of the Scotchlite™ and angle BAC is determined by the height of my camera. At 800 feet (250 m) the optimum angle BAC of a viewer is 0.2°. Tomorrow we'll find out what that means.
Posted by Excelmathmike at 10:09 AM