A siren in Greek mythology was a bird-woman or mermaid who sang so appealingly it was hard to resist sailing over to hear more. However, if you did that, you'd crash onto some rocks. Here's Ulysses and his crew checking out one of the sirens. 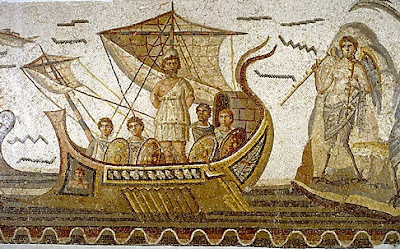 The term siren song came to mean an attractive proposition that was sure to turn out badly if you fell for it. Before we leave this week's series of blogs on NOISE, fog horns and train whistles, I am going to ignore all siren song warnings and share the Victory Siren page with you.

Back in the 1950's it was common to hear air raid siren being tested - not because we were being attacked, but just so if we did face some kind of invasion, or weather disaster, we would know what the warning system sounded like. Most towns had electric sirens on poles. A few large communities had enormous sirens powered by Chrysler Hemi V8 engines! 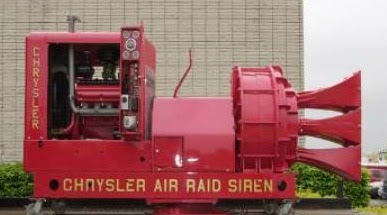 This  makes the whole siren concept very appealing to car guys - a big mythical powerplant from the Fifties, mounted on a frame in the yard, easily started and revved up - makes so much noise everyone in town knows you have something unusual and enviable. A small group of folks (no doubt closely related to fog horn collectors) find and restore these sirens. Find out more at the Victory Siren website.

Here's one of the sirens, for your listening pleasure. Keep your hand near the volume control.


Siren Song Warning: You might end up shopping on auction sites for a full-size siren of your own!

The siren generates air vibrations at 460 cycles per second (Hz) and 138 decibels measured 100 feet away. That's equal to 30,000 watts from a stereo system! It's twice as loud as a jet being launched off a carrier's catapult.

The largest and loudest one ever built is sitting on a mountain-top north of Los Angeles. It's not running now, but stories say that when run at full volume in perfect conditions, it could be heard 60 miles away, in Avalon, on Santa Catalina Island. Here's a map to show you the range. 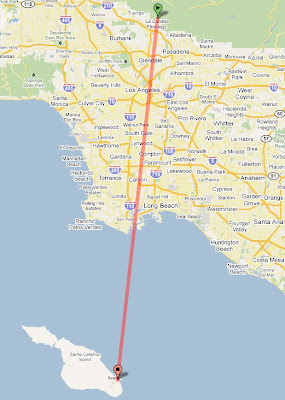 Don't worry about me getting one - my wife has warned me away from that siren song!
Posted by Excelmathmike at 10:31 AM