Hello. This week (an interval of 7 days) we are looking at the math related to gears, and ratios that are expressed in pairs of gear teeth. For example, you might have 7 teeth on one gear, and 28 on another that meshes with it. The ratio is 7:28 or 1:4. Each time the larger gear turns once, the smaller gear will turn 4 times; each time the smaller gear turns once, the larger gear rotates 1/4 turn.

I showed some pictures of a complicated watch yesterday, and today I have a few more. Here's the moon phase indicator gearing [click the image to enlarge it]: 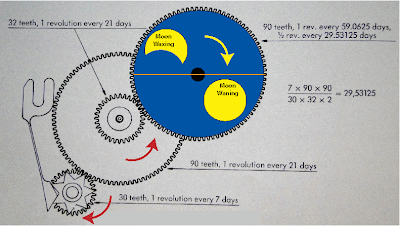 Original art from "The Grand Complication" by Manfred Fritz; modified for this use
At the bottom you see a gear with two sets of teeth. The big teeth (7 of them) are attached to the day-of-the-week hand - together with the spring they make it jump from day to day. The smaller teeth (30 of them) turn the larger wheel (90 teeth) above. A small gear on that wheel (32 teeth) turns another large gear with the moons painted on it (90 teeth). The ratios of all these gears are worked out on the diagram. They ensure the moon wheel turns 1/2 revolution in 29.53125 days - accurate enough to represent the moon for 122 years before needing a day's adjustment.

The goal of this gear train is to rotate the moon disk to simulate the moon's movement in the sky.

The following diagram shows some of the gearing for the year display. Think about this. A watch movement that "beats" at 4 Hz (cycles per second) is also tic-tocking away at 28,800 beats per hour. A little gear somewhere at the beginning of this gear train eventually results in a finger on the decade disk pushing the century slide up one click, once every 100 years! 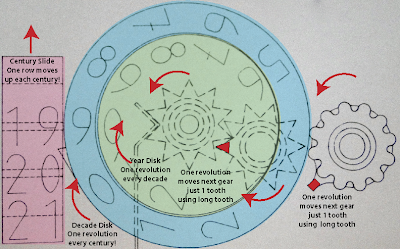 Original art from "The Grand Complication" by Manfred Fritz; modified for this use
The goal of this gear train is to rotate the year wheel every 365 (or 366 days), to rotate the decade wheel every 10 years, and to push the century slide one notch upwards every 100 years!

Something as common as a watch can take us into advanced mathematics pretty quickly. We introduce these enormous numbers very early in our Excel Math curriculum, so kids are equipped to think big.
Posted by Excelmathmike at 3:13 PM