The Fastest Way to Board, Part III

In the past 2 days we've covered some theories on how to board an aircraft most efficiently. The goal is to get on board quickly, overcoming the delays due to people standing in the aisle while someone ahead of them stows carry-on bags in the overhead bins.

It appears the most efficient way is to start with window seats first. We can also stagger the rows that are boarding to reduce conflict.

Inventor Rob Wallace in Australia has come up with a system he calls "the flying carpet".  A seat map design of the aircraft is painted on the boarding lounge floor. People are asked to step into the space that represents their seat on the actual plane.

The catch is that the standing space (about 7 x 18 feet) is only large enough for one person every 2 or 3 rows and 1 or 2 persons on either side of the aisle. Only 30 will fit on the map at a time; the rest have to wait at the sides. 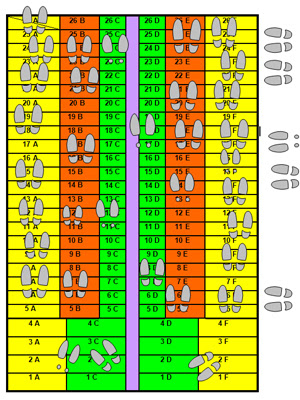 The first person to step into a space blocks the adjoining spaces before and behind, so no one who will be sitting adjacent to her / him can board at the same moment. The other people in that row have to wait.

When the mat is full, the gate agent says go, and the first group of 30 board the aircraft. The next 30 step onto the map in spaces that represent their seating position, and then they board together.

This process separates people adequately for quicker loading of the overhead bins. It does so outside in the relatively spacious boarding area rather than inside in the crowded aircraft. Agents don't have to call numbers or try to line people up manually. One mat design will fit most aircraft, as unused spaces don't matter.

We will have to see if it catches on - so far he has run into the "not invented here" response at the airlines, even though he claims a plane can be loaded in half the time. 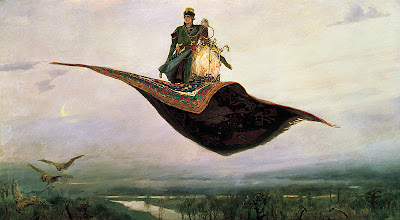 Personally, I prefer the Persian or Russian magic flying carpets which eliminate the need for those pesky aircraft altogether. Apparently they worked like this:

Flying carpets were spun on a loom like an ordinary carpet; the difference lay in the dyeing process. Artisans discovered that a certain clay, 'procured from mountain springs and untouched by human hand', acquired anti-magnetic properties if superheated at 'temperatures that exceeded those of the seventh ring of hell' in a cauldron of boiling Grecian oil. The Earth itself is a magnet and has trillions of magnetic lines crossing it from the North to the South Pole. The scientists prepared this clay and dyed the wool in it before weaving it on a loom. When the carpet was ready, it pulled itself away from the Earth and, depending on the concentration of clay, hovered a few feet or several hundred feet above the ground. Propulsion was possible along the magnetic lines, which acted like aerial rails. Although they were known to the Druids in England and the Incas in South America, only recently are physicists beginning to rediscover the special properties of these lines...

Perhaps if we spent all the money saved from using Wallace's flying carpet, we could figure out how to make these magic carpets again ... in the meantime, you could enjoy a flight across Seyed Alavi's flying carpet if you go to Sacramento airport. 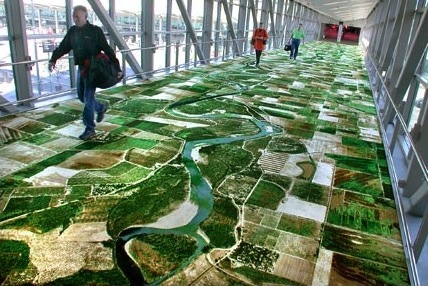 Posted by Excelmathmike at 12:29 PM