The Fastest Way to Board, Part II

I'm continuing the topic from yesterday, on using math to find the best way to board an aircraft. I'll start with a quote:

Dr Eitan Bachmat, doing research at Ben- Gurion University said: "What we suggest is that airlines just don't bother too much with annoying their customers and either board randomly or, if they want to do something, let the window people on, then the middle and then the aisle seats. Playing with the rows seems to be futile."

I read a study from Boeing, who wants to sell profitable planes. Since Boeing has aircraft handy, unlike most researchers, they used some and filled them repeatedly with volunteer passengers. Boeing's research indicated that loading times can be improved by:
The back-to-front method only works best on jumbos (747 types) where two aisles, 40+ rows and lots of room diminish the conflicts.

What has caused this massive drop in efficiency over 25 years? Based on what I have read and observed:

I boarded Concorde once, eight years ago. Just over 100 passengers loaded in under 5 minutes. How? No overhead bins to speak of, no carry-on luggage allowed, only 4 seats per aisle and everyone excited and focused on getting in our seats. We used the random method. 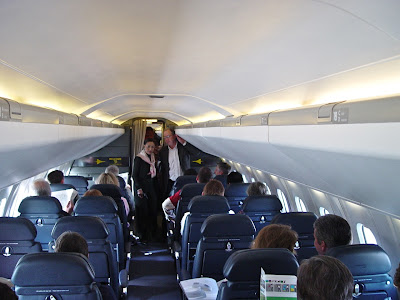 Back to the original question - can we use math to summarize our findings?  Of course we can. Who would believe a blog post without a chart or graph? So here's one I have created, from a research project that compared different boarding methods: 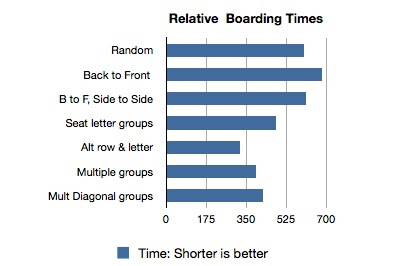 The best result was alternating both seat letters and rows, so no conflicts arise in loading the overhead bins. For example, the gate agent would say:

That approach is fastest for people once they are on the plane, but sadly it's very confusing to people in the gate area. So most researchers discard that option. This report recommended either "multiple small groups" or "seat letter groups".

Can you see a consensus appearing? Three of the expert reports suggest the gate agent say something like this:

Yes there are issues with people sitting together, but hey, it's only for a few minutes and you can cheat if you have to - a few defectors might even speed up the process.
Posted by Excelmathmike at 2:07 PM