Take a Hike, Part I

The highest point in the city of San Diego is atop Cowles Mountain (pronounced coles) at 1591 feet above sea level. In recent years, Cowles has become a popular hiking trail for backpackers, runners, hikers, and dog walkers. After it was featured in numerous magazines and reviewed on Internet sites, Cowles went from a few neighborhood fans and avid hikers to regular visitors of all ages and fitness levels.

Today let’s see how elementary math can help us compare  the length (in miles) of various trails on this mountain. If you need a refresher course, check out some Excel Math Curriculum samples.

In the meantime, grab your hiking boots and walking stick as we stroll through a few miles of beautiful scenery and enjoy the view from the top. Here's a view from the base of the mountain: 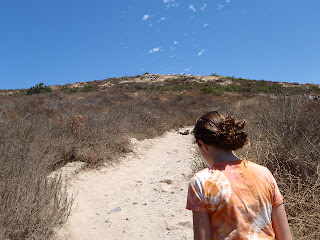 This picture is a bit misleading because the trail actually veers to the left at the top of this peak. From there you head up the final mile to the top. This 1.5 mile trek from the parking lot on Golfcrest Drive to the summit is one of the most well-traveled routes up the mountain. The base of the trail is complete with restrooms and a water fountain plus a bulletin board with snake alerts and maps. Cowles Mountain is one of the most popular hiking destinations in San Diego County. 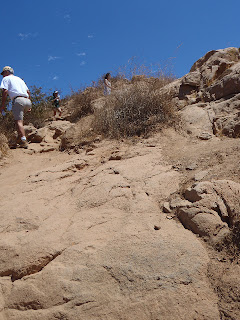 When you reach the top, be sure to touch the stone plaque, or (some people will say) your hike isn’t considered “official”. Some people like to jog down and then hike back up again for more of a workout (and a total hike of 6 miles). 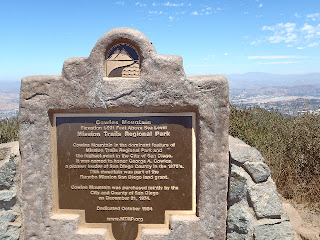 Another way up Cowles Mountain is to take the Barker Way service road from La Mesa. This is a wide path (in most areas) but very steep and gravelly. Bikes are permitted on this road, but not on the trail. Many people bring their walking sticks for this route. Some also bring along their apps to calculate the distance they’ve walked, the time it took, their speed, and even calories burned.

Barker Way also has a trail that joins the first trail from Golfcrest about a mile up. This trail is much less traveled and becomes quite narrow in spots. But it’s very well marked and is about 1.6 miles to the top. You start off on the service road then take a trail off to the left, crossing a small bridge, and then following 25 switchbacks, joining with the Golfcrest trail about 1.05 miles up. Here's the trail about halfway up Barker Way: 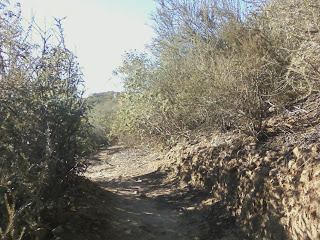 Another route up Cowles Mountain starts in Santee at Big Rock Park. This trailhead tends to attract rattlesnakes at certain times of the year. Perhaps that's why it seems to have fewer hikers than the other trails. From this point to the summit is about 2 miles.

An even less traveled trail up to the top of the mountain begins on Mesa Road. In many of its segments, the chaparral is so high and thick that the trail seems to be passing through a tunnel. This trail is about 2.2 miles to the summit.

Once you arrive at the top, you have a 360 degree view of San Diego county that includes Point Loma, La Mesa, Santee, El Cajon, Mt. Cuyamaca, and surrounding areas. You can even see the Coronado Islands in Mexico on a clear day. There are a couple of maps at the top of Cowles Mountain to help you get your bearings and to show some of the points of interest visible from the summit.

If you feel like a longer hike, from the top of Cowles Mountain, continue down the service road and watch for markers indicating the path to Pyle's Peak. This is a more challenging hike with another 1.5 miles of switchbacks and gorgeous views. Keep in mind that after reaching Pyle's Peak, you will have to return back to Cowles Mountain and take one of the trails down to the bottom for a total round-trip hike of 6 miles.


Here's a recap of the trails and their distances in miles up the mountain: Cowles Mountain is part of Mission Trails Regional Park, about 6,150 acres of both natural and developed recreational acres. So next time you make it to San Diego, be sure to explore some of the hiking trails and bike paths. Happy trails to you! 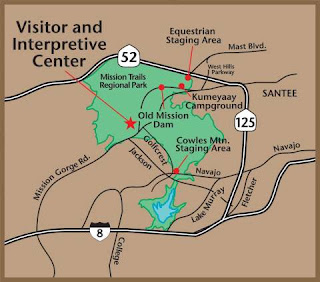