Can You Resist Playing Hookey?

Hockey is a sport involving pucks and sticks. Hookey comes from a Dutch phrase that means hide and seek or an Olde English term Let's Hook it, meaning to run off and escape, or another phrase by hook or by crook.

Other similar terms are skipping, ditching or cutting. A stricter, more legal term is truancy. Truancy even sounds very serious, whereas playing hookey conveys a sense of youthful whimsy, rather than criminal evasion.
Playing Hookey implies you are skipping out of school or work to do something else less responsible, like going fishing! Do you know Mark Twain's characters Tom Sawyer and Huckleberry Finn? Or can you recall that other famous character called Huckleberry Hound™? (Click to see Huckleberry deal with truant kids).

You may be asking, where's the math in this? We find it in the aptly-named Play-Hookey Website. This site's purpose statement says:


While you're out of the classroom, there's no reason why you can't learn a little something and enjoy yourself while you're doing it.

Here comes our math. Resistors are simple components that have the ability of resisting the electrical current flowing through a circuit. This property is measured using in units called Ohms.

Here are some resistors. Because they are tiny, it's tough to print legible resistance values on them. So ages ago they began to be labeled with colored stripes.

Let's look at the 5-band resistor in the chart below. Using the first three stripes, we create a 3-digit number. In this case it's 237. The third stripe tells us how many zeros to add ( 000 ). That makes it 237,000 ohms.  The fifth stripe tells us how close to its specification this resistor is guaranteed to be. In this case the tolerance is 1%. [You may also find 4 or 6-band resistors.] 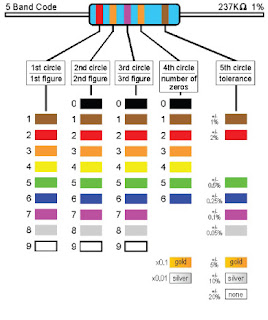 This resistor color code chart was created by Peter Veness at Bournemouth University in Dorset, England.

While we were trying to play hookey today, we learned about math, color codes and electricity.
Posted by Excelmathmike at 11:55 AM