Math of Nuts and Bolts

You might think I made a mistake in the blog title. I hear you saying "It ought to be the Nuts and Bolts of Math." Not today. As you can see, these are real bolts (no nuts in this photo, though).

NOTE - Bolts may also be called fasteners, screws or other terms. 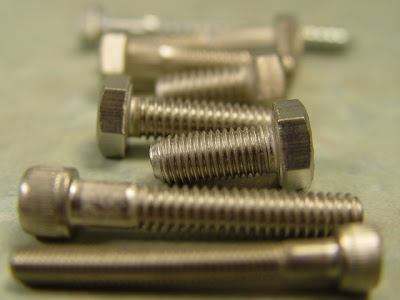 Bolts are identified in a number of ways. All using NUMBERS. We can describe the: 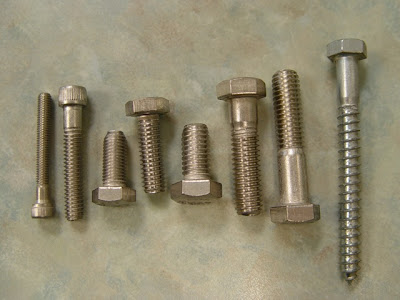 Two of the bolts have fine threads while the rest have been cut with coarse threads.

Two of these bolts may be called socket cap bolts, or more commonly, Allen bolts. These are used in places where a regular wrench wouldn't easily fit.

Five bolts have a non-threaded portion at the top of the shank of the bolt, just below the head. That leaves space for a washer, or for the bolt to pass through and retain a separate piece of material. 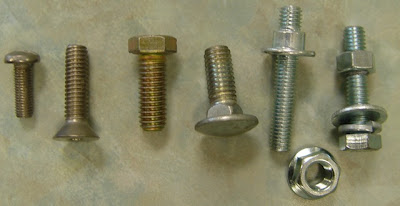 Here are a few more. The color differences reveal the fact that some of them are of different material. One has no head, but has a collar in the middle. One has a conically-tapered head that fits a matching recess. Another has a domed cap and a square shape above the threads. Another has a lock washer, large washer and nut. Finally, one nut with a rounded bottom end is here too!

Here are some of the bolt heads. You can see that different tools must be used to turn them, and also some code markings on them. The markings reveal the strength of the bolts.

You can see that without a math education it would be very hard to distinguish between all these bolts!

They are everywhere - more than 200 billion are used every year in the USA.

In case you are wondering, No, Excel Math is not a hardware store. But our pal Joe accumulates lots of interesting bolts in his business, and he loaned me a few of them for today's blog. Thanks, Joe.


Check Wikipedia for more bolt facts and figures.
Posted by Excelmathmike at 1:07 PM