Which is easier and why?

Here's a problem adapted from one at the end of fifth grade Excel Math curriculum.

It's not too difficult, but the fact we have to show more than one solution process illustrates a troublesome math situation.

Are there multiple ways to correctly solve a problem?

The answer is almost always Yes.

We may be taught to solve for answers in one or two different ways. Sometimes kids may discover additional methods on their own, or in a team where they learn techniques (or just get answers) from their peers. Once in a while a student will turn in a paper, with no evidence of how the answers were obtained. We hear teachers say,

I can't give credit for this; it's not right unless you show the work!

Then some students reply,

I don't know how. I just know this is the answer. I can see it.

They can see it?

The other day when I was researching the blog on Hundred, I read about the Abipones,  a tribe of native people in South American 200 years ago:

The long train of mounted women was surrounded in front, in the rear and on both sides by countless numbers of dogs. From their saddles the Indians would look around and inspect them. If so much as a single dog was missing from the huge pack, they would keep calling until all were collected together again. I have often wondered how they, without knowing how to count, could tell at once, despite the huge throng, that one dog was missing.

We normally use the term Number Sense to describe knowledge about numbers and counting. But in this paragraph, Karl Menninger describes a scene where native peoples clearly had a highly-developed sense of quantity without using numbers (as we understand numbers).

Difficult-to-explain math abilities may be seen in autistic people, and in math whiz-kids. They solve problems so easily that they don't know how to explain it. My wife often sees that at her school.

I can do some problems this way, but because of my job I've learned how to explain the process(es).
I'm not in a classroom, so personally, I don't quarrel about the method or showing the work. I'm happy to see a (correct) answer.

Here are 6 different ways I created to solve the problem: 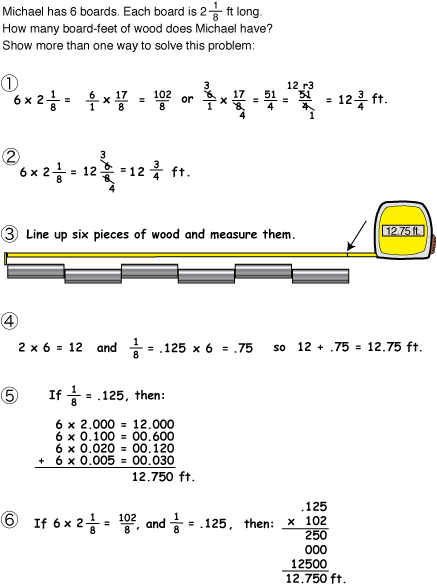 Yes, it's useful to know HOW to solve a problem. OK, it's nice to SHARE the PROCESS with others. DOCUMENTATION is important. Written PROOF is desirable.

But sadly, we have introduced an uncomfortable philosophical question:

Is it the journey (process) or destination (answer) that matters most in math?
Posted by Excelmathmike at 10:42 AM