Let's Sort This Out, Part II

Yesterday we started a series on sorting data.

I selected the most recent 25 countries visiting this blog and assembled some numerical data, including country, number of visitors, population, area, latitude, longitude and political status. Yesterday we covered population and size. Today we start to define the location of these countries.

You can see below that I have sorted the list by the numerical value of the Longitude coordinates (sometimes called meridian). That means degrees of rotation on the earth's surface, east or west from the Prime Meridian. This line passes through the Royal Observatory in Greenwich, England (near London). [click on the map to enlarge it]

Countries with the lowest Longitude numbers are closest to England
The highest numbers are on the other side of the earth, in the Pacific Ocean. If the data doesn't show E or W, it must show degrees + (east) or - (west). You need both the degrees and a directional reference to have a Longitude coordinate point or line.

With Latitude and Longitude plus a bit of elementary math, we can tell where a country is located. We can say "Jersey is 49N, 2W". It's up to our listener to figure out that he can't drive West to Bristol, then South Guernsey or Jersey. We don't have to say "Jersey is about 100 miles South of England's southern coastline and about 14 miles West of France, out in the English Channel."

Notice that Guernsey and Jersey appear to be in the same place, according to my rough data in the table, although in reality they are about 20 miles apart. [click the map to enlarge it] 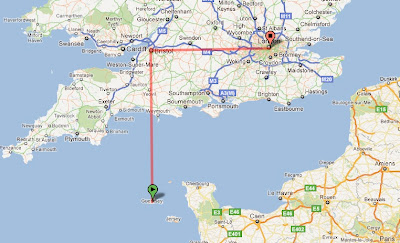 The "round numbers" in my chart are not precise enough for real navigation. To actually find the right island, we need greater precision, such as "the location of the harbor wall on Jersey is 49°11' 00" N and 02°07' 00" W."

The countries with the highest Longitude numbers are out in the Pacific Ocean
Fiji is 8° W of the 180° line and Samoa is 5° degrees E for a total of 13° distance (horizontally). They are 5° apart in latitude (vertically). A line leaving Fiji runs diagonally northwards and eastwards to Samoa. Navigation on the surface of a curved globe takes more skill and math knowledge than we have available today, so I checked Google Maps and learned they are 710 miles apart. [click the map to enlarge it] 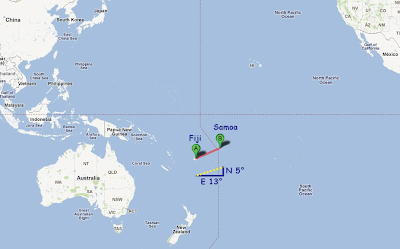 All this with only elementary math and a little sorting and studying.
Posted by Excelmathmike at 3:13 PM