My friend Susan and I were discussing how photos appear on website and advertisements. Both of us are irked when illustrations are stretched or squashed to fit in the available space. The technical term for this is "out of proportion." We cover this even in elementary school math when we discuss ratios.


Let me explain what I mean.

You might see descriptions in your camera or photo software that say 3 by 2, or 4 by 6, or 1024 by 768. In all of these cases, we are showing the width and the height of the image. In the first case the ratios have been reduced, or simplified as far as possible. In the latter case, it's the count of pixels in a horizontal direction followed by the pixels in the vertical direction.

Now let me show you what I mean by irksome illustrations. Here are three versions of a picture I took the other night:

The center one is at its original aspect ratio (height to width) and the other two are "squished" and "stretched" by only 10%. I left the height alone and altered the widths. These changes are quite noticeable on pictures with a round shape in the center. Our eyes are good at picking up "out of round" conditions.

Now let's try it with some faces. These talented folks are my friends and family members. They were hanging spoons on their noses during dinner, just to show me that they could. Notice the giraffe-like necks in the vertically-stretched image? 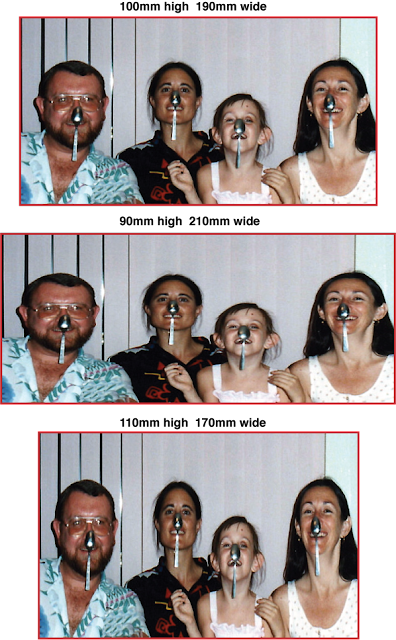 This is about the most distortion you can get away with - before viewers say Hey! What's going on!

Now let's examine one more example. Here's a Toyota Scion - yes, a boxy little car to start with, but it's worth using to make a point. In this case I took a horizontally-oriented picture and made it square. This is a common error made by people laying out ads for used cars.

In the square picture, it hardly looks like a real car. Sigh.

Folks, don't do this! Please! Lock the proportions in your layout or photo editing software, or at least stay within a few percent of the original aspect ratios. Even if we can't remember the math that explains what you have done, we will notice.

PS- yesterday we talked about pounds per horsepower; today it's height by width. Both are ratios.
Posted by Excelmathmike at 12:25 PM