The Rate of Change

Acceleration is a term that describes the rate of change of both the magnitude and the direction of velocity of an object.

What's this? you ask. Are we getting into physics?

Normally, this blog discusses ways that average adults like us today can use math we learned back then to deal with our everyday lives. The blog supports our goal that Excel Math (elementary math curriculum) will help prepare kids to be more confident and competent adult citizens.

But today we reach even further. One of our executives challenged me to incorporate something his son learned in school last week. So here we go:

An object that's accelerating can be thrown or projected, self-powered, or falling (pulled by gravity). It can go in a straight line, or it can be rotating or orbiting.

In plain language, if you want to accelerate quickly, you need a powerful force (engine) or a light projectile. Or both. At this point, most men are probably thinking about cars ...

Contrary to popular thought, flames don't make you go fast. This is still a golf cart and accelerates like one, despite the clever '57 Chevy styling and the flame paint job. It has between 11 horsepower for its 750 pounds, or 1 hp for every 68 pounds. 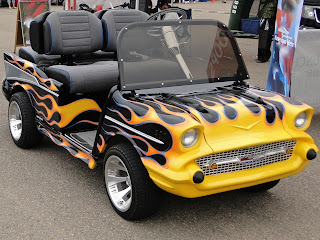 This Navy LCAC (landing craft air cushion) has lots more power - 16,000 continuous horsepower to be exact. But it weighs 100 tons with a modest load on board. Since the power is lifting as well as propelling, the acceleration is fairly feeble. It has about 1 horsepower for each 12.5 pounds of mass. 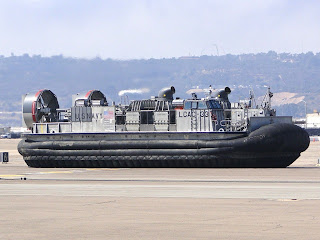 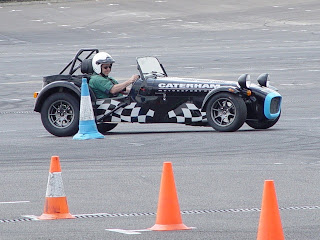 Finally, if you want to accelerate VERY VERY QUICKLY, you could try a drive in this car. It weighs about 2250 lbs and produces 8000 horsepower (for 10 seconds). The power to weight ratio is 0.28 pounds per horsepower, or 1 hp for every 4 ounces. 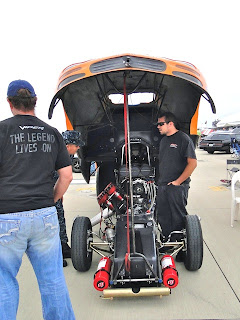 PS - remember what I said earlier about flames not making your car go any faster? Well, I have since learned that the real flames (exhaust) from a dragster generate about 800–1000 pounds of push (force) to assist the car going forward. 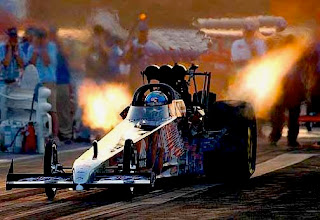 Posted by Excelmathmike at 12:46 PM