Census - opening a can of worms? 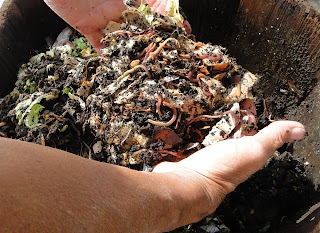 We have a worm farm. We are keeping them like pets - not really doing anything productive with the worms, but they get to eat all our scraps and lots of our newspaper.

We recently bought a Worm Factory, which is a plastic container for the worms to live in. It's a bit like a beehive.

I'd like to know how many worms we have. But it's not that easy to count, as you can imagine!

They hide when you open up the lid, they intertwine, wriggle, and do lots of other wormy things.

Looking for ideas on the Internet, I saw several people suggest killing the worms, so they would be easier to count. Another said suck them up through a straw taped onto the vacuum hose.

I learned about a company - Union Biometrica - that makes high-tech machines for laboratories, to count cells, seeds, mosquito larvae, etc. That was out of my budget, and too fancy for my purposes.

Westgate Laboratories does "worm counts" but I learned these are really a worm egg counts. They take a small sample of dung (horse poo) and examine it under a microscope to find out how many worm eggs are present.  From that count they extrapolate an estimate of the worms in your horse. Yukk!

I found a story of a group of kids doing a worm census out in the forest. They put ground mustard in water, poured the liquid on the ground, and the worms came up, spitting and gasping. They get counted while on the surface. I can see where that's a possible way to get them up out of the soil, but I don't want to anger my worms - they can disappear overnight if you get them upset.

Some other kids did their own census at home, using the mustard technique. They were frustrated by too few worms - only 3 in an afternoon. No problem counting them! 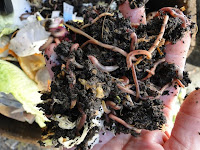 The worm farms that supply mail-order worms to home worm factory buyers tell me there are about 600-1200 worms per pound.

Another source says 1000 worms per square foot (or layer) of the bin. 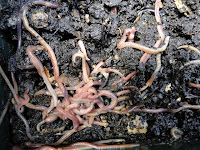 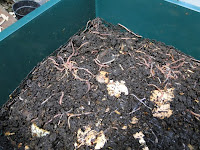 We started with a  handful 6 months ago. Now we have thousands. Since the Factory can accept more layers, I guess we should have plenty of room...
Posted by Excelmathmike at 11:41 AM