Is there Math in a Pomegranate?

You know pomegranates, right? Red fruits from the Middle East (and California) with lots of tiny red juicy seeds enclosed in a tough skin. The juice stains your hands and clothes. Punica granatum is the horticultural name of this plant.

WHERE'S THE MATH?
Is there math in a pomegranate as well as tiny seeds? Well, why not? Let's take a look. 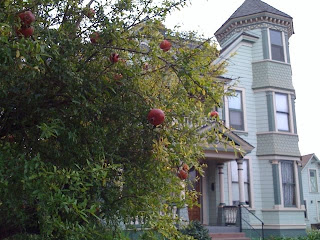 Pomegranate trees grow 20-30 feet in height. Here's one next to a house that is three stories tall (plus basement).

You can't tell from this photo but I estimate that this tree is about 18 feet tall, based on my experience reaching up to get fruit off the top branches. If I am 5 feet 10 inches tall and the picker is 12 feet long, how high can I reach? Don't forget my arm's length.

The average pomegranate has about 100 calories, but you might burn that many just trying to get the seeds out, then washing your hands, and clothes! 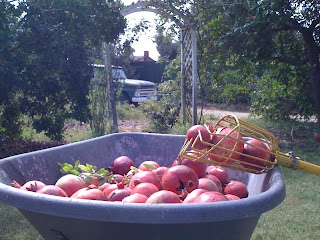 October has been pomegranate harvest time in Southern California for exactly 240 years, since the mission-founding Fathers brought them here from Spain and the Middle East.

In what year did they bring them?

Today we went off to our friends' house to pick and seed the pomegranates. They have 4 trees which produce over 1000 pomegranates a year.

HOW MANY SEEDS?
In Jewish tradition, pomegranates were said to contain 613 seeds, and each of those represented a good deed that an observant Jew could perform. 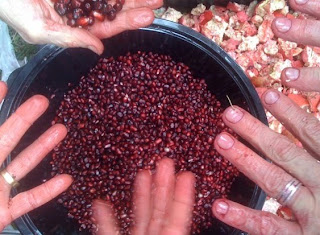 I have to admit that even though we opened an entire wheelbarrow of pomegranates, we didn't count the seeds from a single one. But I am sure we got more than 613!


Did I mention that pomegrante juice stains, both your hands and your clothing? (Yes)


Don't worry about the hands, because soap and water will take care of the staining. Clothing tends to have a more permanent color problem...


We made sure we wore old clothes so it didn't matter if they turned reddish-purple.

We had such fun doing this we didn't think about counting either the number of seeds or fruit. But I did some research later.

THIS MANY SEEDS
I found a site where people counted the seeds in more than 200 pomegranates. The range went from 165-1370 per fruit. The average average was indeed 613! But they could have counted more or less, or fruits from other countries, etc. etc. and come up with different number.

So we could safely say 500 or more seeds in a pomegranate.


Now that we have some data, we could plot it, slice it and dice it.  It would be fun math to do so. But we won't.

THIS IS MESSY FUN
Because it's more fun to make the juice. You throw the seeds into the ACME 6000 JUICER (No, I didn't steal it from Wiley Coyote, that's really the name of this machine!) which spins them at the a fantastic 3600 revolutions per minute. The seeds stay inside and juice comes out the back. A new juicer costs about $200 but our friends got it much cheaper at a garage sale.

After a straining through a filter, the juice goes into jars to become jelly, or a healthy fruit drink. 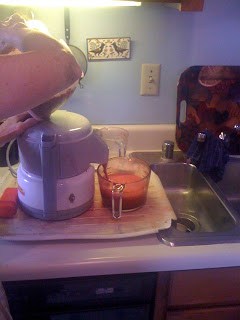 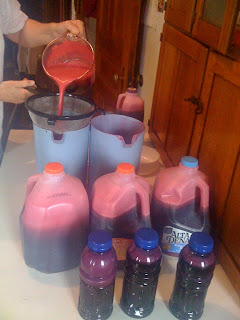 If the large jugs hold a gallon and the smaller containers hold 20 ounces each, and we got about 20 quarts of juice today, how many ounces of juice did we get?

Each container is full of anti-oxidants and vitamins and stuff.

(See how boring it is to say " container full of stuff" - don't you want the numbers?)

Of course, the pomegranate has been a favorite subject of painters for millenia (thousands of years). 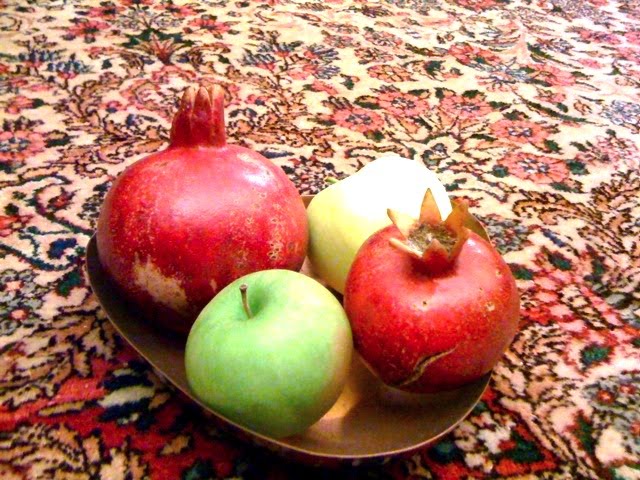 And that's how we get math out of a pomegranate.
Posted by Excelmathmike at 8:00 AM