Nice Price for a Bag of Rice?

Rice is a staple food. It provides a fifth the calories consumed worldwide, is the primary diet for a third of the world's population, and the second-largest crop in the world. Unlike corn, most rice is grown for human use rather than for animals or industry.

China, India, Indonesia, Bangladesh and Brazil consume the most rice. Most countries are self-sufficient - they eat all the rice they grow. International trade in rice is a relatively small portion (6%) of world production. Almost all exports go from Thailand, Vietnam and the United States to Indonesia, Bangladesh, the Philippines and Brazil.

What about prices? Rice is a commodity and harvest size fluctuates. In addition, rice prices can be subject to speculation by traders or shifting currency values. These factors pose great dangers to the countries whose citizens are dependent on rice; especially people who live at a subsistence level.

Here's a chart showing the prices of rice over the past 5 years. You can see the dramatic shift in prices during 2006-2008. 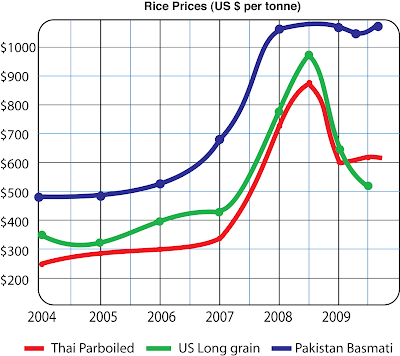 No one is quite sure why the prices have climbed so high. In response, a group of Asian countries is trying to create a political bloc called the Organization of Rice Exporting Countries (OREC).

By working together in a group like OPEC, they hope to stabilize the price of rice. One problem they face is that it is much easier to grow more rice than it is to find or retrieve petroleum.

There are multiple sources and types of rice. I've only included 3 here.

I personally prefer Basmati (Queen of Fragrance) rice. It's a variety of very aromatic (smells good) rice, doubles or triples in length when cooked, and isn't sticky. It's grown in India and Pakistan, below the Himalayan Mountains.

You can find dozens of varieties and grades of rice. Grading indicates how many broken grains you will find in the rice (typically 4% or 10%). Rice with a lower percentage of broken pieces looks nice and brings a higher price.

In my local market, there are more than 20 different types of Basmati rice being sold in 10 or 20 lb. bags. I thought briefly about buying (or borrowing) one bag of each type to take a photograph, but quickly changed my mind. I didn't drive a large enough car, nor could I possibly eat that much rice!

Let's see if we can figure out the markup on these bags of rice. If the wholesale price is at its peak, at $1000 a tonne, then what is the price per pound? A tonne is one metric ton, or one thousand kilograms. That's 2200 lbs for those of us from the old school of standard units. 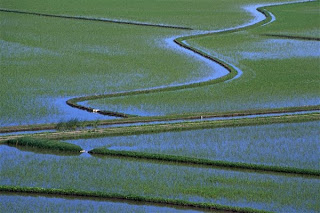 NOTE: Most rice in the US is grown in the lower Mississippi valley, along the Gulf coast, and in the northern end of California's Central Valley.

While the rice paddies need tremendous amounts of water, they also provide habitat for millions of migratory birds. Here's an image from the Calif. Dept. of Water Resources.

Posted by Excelmathmike at 9:20 AM