What do you mean, ABRASIVE?

Have you ever known an abrasive person? A person who rubs you the wrong way? Seems to be constantly wearing you down?

Like yesterday's post on density, today we look at a term used for personalities and for physical characteristics that we can describe mathematically. 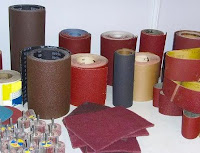 Abrasives are used to rub things so they become smoother, usually in preparation for a finish coating or paint. If you buy sandpaper, it is described with a grit number. I know 80 is very coarse and 400 is fine. But I had no idea what the numbers really mean.

One place I checked said:
"Grit is expressed in the form of numbers on back of the paper. These numbers range from 24 all the way up to 1,000, though in practice most homeowners will never use grits at the top or bottom of the scale. These numbers are industry designations and do not correlate to the physical world."

Really? Do not correlate to the physical world? I doubt it; it probably means that the person who thought up the scale had other things in mind that are not obvious to us. Let's keep looking.

GRIT NUMBERS
Grit numbers refer to the size of the sharp particles used to abrade a surface. Like most mature industries, various standards have developed to describe abrasives. The most common in the United States are: 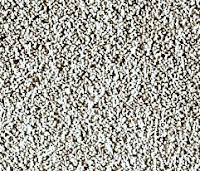 FEPA - Federation of European Producers of Abrasives; the same as the ISO 6344 standard for describing abrasives.

Here's a table of a few common sizes of grits. You can download a complete table at the Woodturner's organization site.

Aluminum Oxide is commonly used on wood. The pieces used as the abrasive tend to break up when used, thus renewing the sharp edges and continuing to work longer.

Garnet uses tiny bits of stone used for the abrasive. It wears faster than oxide and produces a smoother surface (for the same grit number).

Silicon Carbide is best for smoothing metals, plastic, and fiberglass.

Ceramic is the hardest of common abrasives and is used on rough grades. It can also shape and level rough wood and is often used on belt sander belts.

Emery is used on metal, and is usually attached to a cloth backing rather than paper.

Sand becomes an abrasive when shot out of a nozzle onto a rough surface. The process is called "sand-blasting" and can be done with all sorts of abrasive media, including different sorts of sand, glass beads, walnut shells, water, etc. 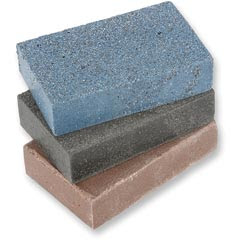 You can buy abrasives on paper, cloth, plastic, a belt, in a block, on a stick, or in a bag. The choice depends on how you will use it.

There are standards for describing sandpaper backing, its strength, thickness, waterproofness, how it attaches to a tool, etc. Paper is described from A (Lightest) to F (Heaviest) then the letters refer to cloth J (Lightest) on up to X (Heaviest).

After all that, then you still have to decide the shape - do you want sheets, rolls, discs, or other shapes.

Abrasives are even embedded into rubber blocks, which gives you something to hold onto, and allows for easier sanding on uneven surfaces.

These abrasives can be used to prepare everything from the side of your house to your fingernails.

And if you use them frequently, they will wear you down as well as the surface you are sanding!
Posted by Excelmathmike at 10:52 AM