An Intersection of Unions?

No, I am not talking about the United Auto Workers and the International Longshore and Warehouse Union getting together for a meeting, but instead about one of my favorite math topics.

The Union and Intersection of Sets (as demonstrated by Venn Diagrams)

Venn Diagrams show the relationships between groups of things. Although people had toyed with the concepts before, John Venn popularized these diagrams. In 1880 he published a paper expounding on their use, but he called them Eulerian Circles. The idea is to visually show relationships between sets, using overlapping circles.

I often get calls from parents confused about the terms union and intersection of sets. The UNION is the total of ALL members of two or more sets, and the INTERSECTION is the set of ONLY the members that belong to both. 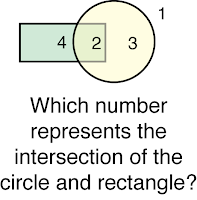 THREE GROUPS
Here's a problem from Excel Math that uses a Venn diagram to illustrate the relationship of drinking coffee, tea and water. This is an Order-three diagram.

The second set of circles (to the right) shows how there are 8 possible regions.

FOUR GROUPS
If you want to show more relationships, you need to have different shapes because circles won't do it. I came up with a new list of drinkers based on the preferences of people in our office. I also included people who drink soda all the time, including in the morning. The rectangles show the possible combinations. 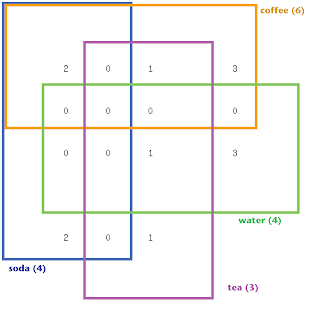 The following diagram came from a Venn diagram generator created by Juan Carlos Oliveros. It uses ovals to display the same relationships between soda, coffee, tea and water drinkers. 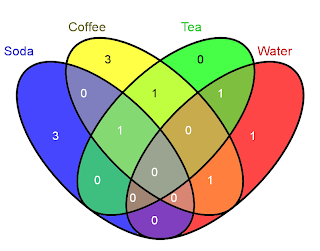 The meaning and the relationships are the same in both of these last 2 diagrams, but the physical representations differ.

FIVE GROUPS
Here's a diagram that can represent 5 sets. It was created by Anthony William Fairbank Edwards (whew!), who somehow got the idea of projecting some of these shapes on a flat surface after plotting them on a sphere. Notice how the green line looks like the seam on a tennis ball? 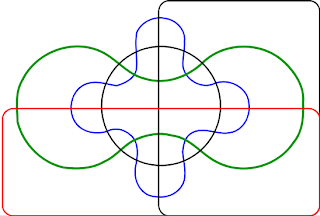 You will have to come up with your own water-cooler survey, and plug the people in yourself!

Posted by Excelmathmike at 1:09 PM