Reading the newspaper yesterday,  I saw a statement that made me think twice: 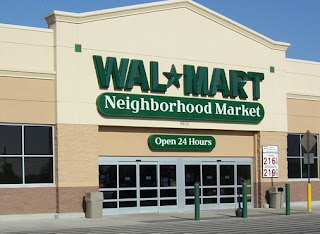 Walmart ... is recruiting a new team of managers and buyers that will focus exclusively on the smaller [Neighborhood Market] stores, which, with 150 locations, currently represent only a fraction of Walmart’s total US sales.

I saw the word fraction. Sounds like math to me. Is this statement true? How can we check?

(I suspect the distribution centers might help support neighborhood markets, too - but it's not clear.)

SUBTOTAL #1
Adding the three types of stores and the distribution centers (while ignoring  parking lots, room the trucks take up on the highways, and other esoteric data) gives us Seven hundred eighty-five million square feet of floor space.

MARKETSIDE STORES
Walmart is testing a new store format similar to Tesco Fresh and Easy stores. They have 4 of these in Arizona, with an average of 15,000 square feet per store. That's not even enough to make a rounding error on the big store totals, but we'll calculate the number anyway, since we can do it in our heads. I find that 4 x 15,000 = 60,000. Six percent of one million, or one-sixteenth of a million. 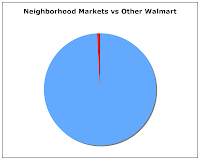 Now we can do some math and reach a conclusion.

Are the neighborhood markets just a fraction of the total Walmart? Yes, they are. Here's a pie chart to show the comparison.

Neighborhood Markets are less than one percent, or in (simplified and rounded) fractional terms, they are 1/130th of the total Walmart presence.
Posted by Excelmathmike at 8:42 AM