Yesterday Steve Jobs talked about the new iPad and why its 10-inch screen is so much better than the 7-inch tablets being talked-up by a couple other companies. He said it looks better, it's easier for your fingers, etc. And he stated that the smaller screen is barely more than half the size of the larger one.

Let's talk about diagonal screen measurements (the bright magenta line) and why a small increase is really a big increase. In this case we really need a picture to save 1000 words of description, so here you go: 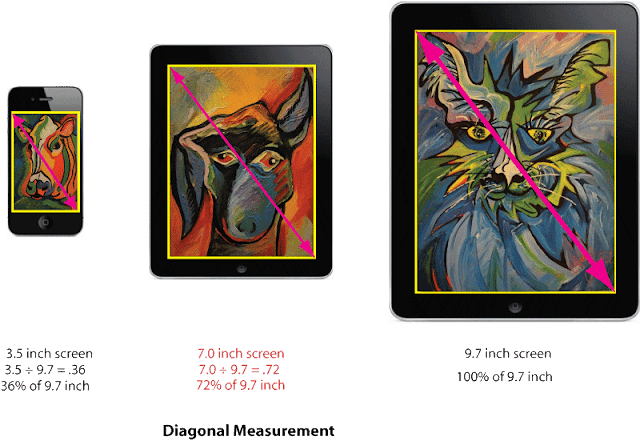 The first screen above at the left is the 3.5-inch screen of an iPhone. The second image is a (never-to-be-built-by-Apple) 7-inch tablet, and the third image shows the 9.7-inch iPad. The diagonal measures are shown below the images on the screens.

The iPhone's diagonal measure is only 36% of the largest screen - a bit more than 1/3 the size. This bright picture shows you a comparison of the surface area on these three screens. Did you notice the yellow rectangles in the first image? I took those and duplicated them on this picture.
The smallest one is 13% of surface area of the largest one. The yellow tint on that small screen is 13% of the intensity of the largest screen (almost looks white, doesn't it?). It's only 1/7th the size of the large one.
The rectangle in the middle represents the area of our 7-inch screen, which is 54% of the surface area of the large screen and for good measure, it's 54% of the intensity of yellow. It's just over 1/2 the size of the large one! (Just like Steve said ... )
So the large screen's surface area is 100%, the intermediate one 54%, and the smallest 13%, while the diagonal measures are 100%, 72% and 36%? Are you thinking, How can that be?
Let me just say, If you are confused by how that same 7-inch middle screen can be 72% when measured diagonally, and 54% when measured by area, welcome to elementary school math!
Posted by Excelmathmike at 2:04 PM