The cost of long life

We expect expensive things that we buy to have a moderately long life. For example, in 2 years:

Some thing have shorter lives, such as mobile phones or children's toys or laptop computers. We only worry if they fail too soon - in a matter of 2 months rather than 2 years. But what about ourselves? Are we ourselves lasting too long? Not making room for new models? In constant need of expensive repairs?
About 800 years ago, eyesight became one of the first age-related disabilities to be countered, with eyeglasses. Now we have contact lenses, implants and other corrective surgeries of various types.
Impaired hearing was tackled a few hundred years later, with the widespread use of ear wax cleaning spoons and ear trumpets. Now in this century we've developed hearing aids and cochlear implants.
Older people have always faced stiffness and arthritis - and as our population exercises more, joints are wearing out even faster. But technology has come to our aid. Many people have new knees or artificial hips.
All of these things are beneficial for older folks who need relief, but no so good for the up-and-coming generations who are paying for our repairs. We are a burden to them, and the statistics are depressing!
Globally we face increasing health costs, pensions, housing congestion, senior care shortages, etc. because longer lives do not automatically translate into longer careers. There are penalties for retiring early but no great incentives for staying on the job years longer.

Although many jobs can be managed by a very-senior persons, in general companies like to move the old out and slip the young in, if they can. And they young need those jobs too, to support us.
Japan is leading the way, with the highest number of retired people relative to the lowest number of working people. Soon they'll have more retired folks than they have working people. When those retired Japanese (mostly men) leave their offices, they start using up their savings, drawing on their pensions, and also sit around moping and making their spouses miserable with RHS (retired husband syndrome).
I wouldn't be surprised if a few old complaining Japanese men get konked on the head with a cooking pot - but even without that potential threat we will have a surplus of elderly women. Men die far earlier than women from health-related causes (nearly 5 years earlier, on average) and many more men have died in wars.
So. I had planned to support all these assertions with tables, graphs and charts - and maybe someday I will. But it's Friday and I have other things to do. Let me just conclude with this parting thought:
If we look forward in our crystal balls will we see a future filled with huge numbers of poor, elderly women wearing eyeglasses and shouting back and forth to each other about their former husbands and their new artificial knees? 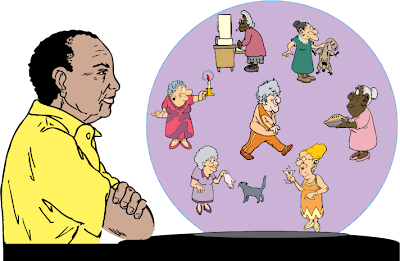 Or will they all be suffering from Alzheimer's, dementia and other mental deterioration, and thus have forgotten all about us? (That's going to be my wife in the middle, in the track suit!)
Posted by Excelmathmike at 2:36 PM