Who knows how the blood flows?

My fingers are cold. It's poor circulation, I think. Then I wonder - how much circulation should I have?

I know that my pulse rate is about 78 heart beats per minute.

According to some gory medical websites, every minute the blood in the body travels out to the ends of our fingertips and toes, and back to the heart and lungs. It's estimated that the combined length of all the blood-containing pipes (arteries, veins, etc.) in the body is about 100,000 miles. [who decided that - it's 4 times around the world!]

A liter of blood weighs about a kilogram. So your heart is moving 7000 kilograms of blood in a day, up and down in and out your thousands of miles of arteries and veins.

No wonder my fingertips are cold! I must be exhausted from all the hard work my heart is doing.

Some people are quite comfortable with the idea of talking about blood. It's not my favorite subject, as I tend to faint at the sight or mention of needles. Blood tests are a grueling experience and I avoid them whenever possible. Why hasn't the medical profession found another way to test people?

The only time I tried to donate blood, back when I was in college, I was able to eke out about a cupful in 45 minutes - all the other donors had lain down, given blood, eaten a donut, drank some orange juice and were on their way in 15 minutes ... that's me, below: 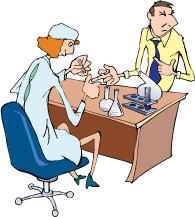 I lived in the UK for a year during the period of time when "mad cow disease" was discovered, so I have been banned for life as a blood donor to the Red Cross. That saves me from appearing selfish or cowardly if asked to give blood ...

In some parts of the world, cattle can get an infectious, fatal brain disease called Mad Cow Disease. In these locations, humans have gotten a new disease called variant Creutzfeld-Jacob Disease (vCJD) which is also a fatal brain disease. Scientists believe that vCJD is Mad Cow Disease that has somehow transferred to humans. Evidence from a small number of case reports involving patients and laboratory animals suggest that vCJD can be transmitted through transfusion. There is no test for vCJD to protect the blood supply. This means that blood programs must take special precautions to keep vCJD out by avoiding collections from those who have been living where this disease is found.

I think I better go lie down. I'm feeling queasy!
Posted by Excelmathmike at 11:37 AM