Going to the Dogs, Part I

There are approximately 78.2 million dogs with owners in the United States, according to the American Pet Products Association 2011-2012 National Pet Owners Survey. Which begs the question, "How many dogs are there without owners?" We'll tackle that question another day.


Here's a breakdown of pet ownership in the United States, according to the 2011-2012 APPA National Pet Owners Survey:

In Excel Math, we teach students how to interpret pie graphs and compare data. Create A Problem on the back of each test give students a chance to interact, create and solve their own problems. These lessons provide a great blend of math and literacy—students read, solve and create problems using higher-order thinking:

Today we'll meet a few friendly pets from around the country, each with his own personality and preferences. This is Molly, a seven-year-old Labradoodle. She was born on a farm in New Mexico and now lives in Poway, California. In addition to helping out at the office, Molly loves to eat tangerines right off the tree: 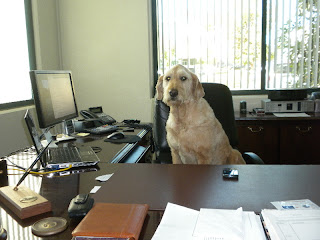 Thirty-nine percent of U.S. households own at least one dog. Twenty-one percent of owned dogs were adopted from an animal shelter. Here's nine-year-old Sadie, a Rhodesian Ridgeback. She was adopted from the SPCA in Colony, Texas. Sadie now lives in North Kansas City, Missouri and loves to snuggle under the covers: 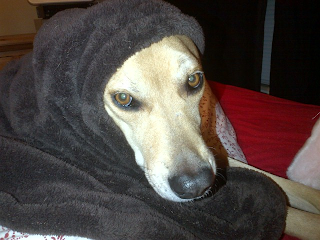 Oslo was also adopted from a rescue shelter and now resides in Tacoma, Washington. He is a seven-year-old Husky/German Shepherd/Wolf mix who loves to play fetch with any type of ball. In this photo he's enjoying the snow at Mammoth Mountain in California: 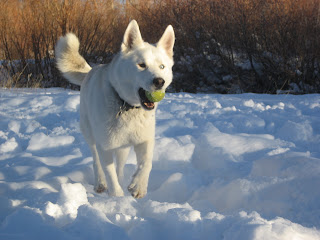 Walking with a pet also helps to sooth nerves, plus it's great exercise. Most people seem to instantly relax when stroking a pet. Studies conducted worldwide have shown that the impact of a stressful situation is less on pet owners, especially on males, than on those people who do not own a pet. (Josephine M. Wills, Waltham Centre for Pet Nutrition, United Kingdom)

Pets can also help with mental health. Rev. Susan Gregg-Schroeder is Coordinator of Mental Health Ministries and is the author of In the Shadow of God's Wings: Grace in the Midst of Depression. Many people living with severe mental illness have shared stories with her of how their pets provided them with unconditional love and acceptance during their illness. One woman with a history of bipolar depression wrote about finding comfort in her parakeets. Her doctor actually recommended her pets as an effective therapy. Read more...

So if you're feeling stressed or depressed or simply need a bit of puppy love, it's time to hang out with your favorite pet.