A few months ago I did a blog on imaginary words that convey the sense of size or value.


250 billion.
Two Hundred Fifty Billion.
Dos Cientos Cinquenta Mil Millones.
Or as the Greeks would say, διακόσια πενήντα δισεκατομμύρια
After yesterday's post on saving 1.5 trillion calories in our food by 2015, I came across a story about four global companies in the food business. Between them, they sold 250 billion US dollars of products. In one year!

A shorthand description for the companies is ABCD.
Wow! That's a lot of food. It's hard to even imagine how large that number 250 billion is.

1. Gross sales of food by 4 big companies
2. National debt of Mexico
3. Gross National Product of Denmark
4. 2500 metric tons of gold
5. Number of hours of television watched by all Americans last year
6. Forecast for online sales of products in the USA by 2014
7. The number of microflora bacteria in only 1 gram of probiotic supplements!
8. The following is the most math-ish example of 250 billion that I have found today:

Alan Chaumont and Tom Muller checked all the prime numbers up to 250 billion and found only 21 of them are Elite Prime numbers. They said,

Dennis Martin took their results and went on up a few hundred billions farther, but found no more elite primes.

I'm about to stop counting now. My final example?

9. The number of whirly-gig novelties created out of beer and soda cans for sale at flea markets! 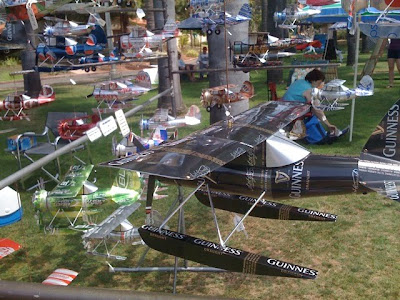 Posted by Excelmathmike at 8:52 AM