In the United States we classify batteries in mysterious ways. Rather than using numbers like 12 volt, 500 amp/hrs as we do with automotive batteries, we just use letters.

THE BATTERY ALPHABET
We have these familiar labels that we rely on (although some batteries do have fine print listing ampere-hours):
I'd like to investigate a bit of the elementary math involved in checking for a bad battery.

My wife uses lots of rechargeable and disposable batteries in her job as a PE teacher. Portable music players, amplified megaphones, walkie-talkie radios, etc are all part of her portfolio of equipment. So the batteries are always going dead, dying, leaking, being lost, getting into the wrong piles ... you name it.

WHEN A BATTERY GOES DEAD
There are some clues for the user when a battery has lost its charge, but they are not crystal clear:
You might attach a voltmeter to a battery and see if you get voltage at the terminals. Nice thought, but due to the way batteries work, they show full voltage when there is no load applied - and that means during a voltage check. You need more elaborate equipment to fully load-test a battery. Most people don't have that capability. 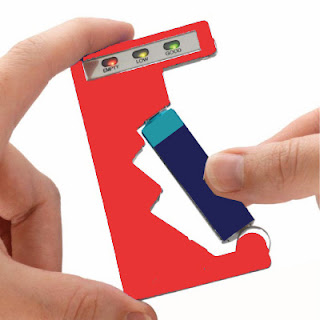 I used to have a small tester like the one you can see above this paragraph. It was a free gift from a client 15 years ago, but it became unreliable and finally it broke completely.

A BETTER BATTERY TESTER
In an effort to improve our situation, I looked for a better battery testing option than the cheesy $5 tester at my local electronics store. This is what I found - the $75 ZTS Multi-Battery Tester. 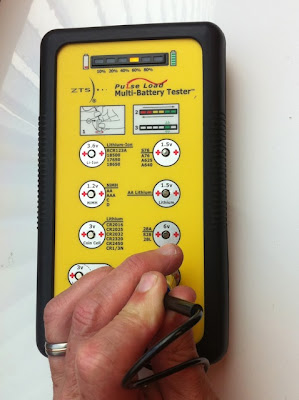 In order to understand how it works, I checked out the patents behind this invention. In essence, the inventors tested HUNDREDS of samples of 25 different TYPES of batteries. They distilled their finding down to tables that included the NO-LOAD VOLTAGE, the VOLTAGE shown at various PERCENTAGEs of charge, and so on. Here are a few: 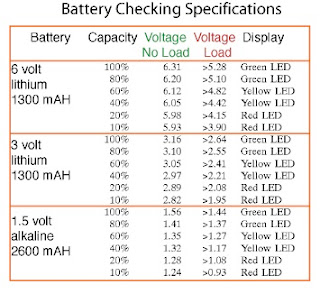 Then they came up with a device that has a set of studs on top. You set the battery on one stud, connect a lead wire to the other end of the battery, and the machine "wakes up". It notices which stud you are using, checks the reference table and compares the no-load voltage, applies a small load, measures the load voltage, compares what it sees to the tables in its memory, and makes a preliminary judgement. Then it applies a series of other loads in rapid succession (pulses) and checks its memory again. A clever idea and well worth a patent, in my opinion.

Eventually, in a few seconds, it issues its findings by lighting the proper LED at the top of the device. The graphic above shows a battery at 60%, and the one below shows 80%. 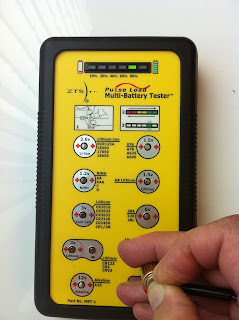 BATTERY SAVINGS
I'm happy to say that we battery consumers can do all this with elementary math, as taught in our Excel Math curriculum.  No rocket science is required. Here are all the batteries we had put in the recycle box, ready to throw out! But our new tester says they are 80% or 100% charged! 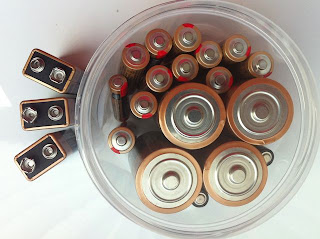 Total value = $34.68. In the first afternoon I have saved almost half the price of the tester.


Posted by Excelmathmike at 4:07 PM