What number am I thinking of? Part IV

This week's blogs have considered NUMBERS. The fonts used for numerals. Computer-generated or handwritten shapes. Things we write on paper or type on a screen to express value.

Today I am changing gears slightly. I want to consider NUMBERS that are used to express identity. Not Social Security numbers, or bank accounts, or even driver's license numbers. But License Plate Numbers, or as they are commonly called in England, Number Plates.

The fonts used to create the numbers on these plates are distinctive in many ways because of their public function. They are not usually employed in math calculations!

LICENSE PLATE FONTS
Although in some places you are able to choose license plate numbers or characters, you don't get to choose the shapes of the numbers. That decision has been made for you. The numerals below are typical of those on US license plates, although each state can choose its own designs:

Here's a different font used in Ontario, Canada. Notice its height and the lower x-height of the 4? The roundness of the bowl on the 9 compared to the squarish bowls of the US font above?

Fonts used in North America tend to be narrower and taller than those in Europe, due to our standard license plate size, which is taller than the horizontally-oriented European plates.
Because US plates have less width, condensed characters are used to fit into the available space.

Like US states, European countries can create their own fonts. Here's a common German font called DIN 1451, that was in use for most of the 20th century. Notice there are two variants in the font set (6 & 9).

Here are fonts used on UK, French and German plates. I have one or more of each country's plates in my garage collection. All three of these illustrations are to the same scale.

Can you spot the differences? Are you German, French or from the UK? Can you tell me which is which?

Here's a license plate font from New Zealand. What's the most obvious difference from the numerals we have looked at so far?

PLACES TO GO
If you want to see license plate designs and fonts from all over the Western world, you can go to a resource site created by Leeward Productions.

If you want to see actual license plates, then go to the License Plates of the World site.

If you want to see how license plates are manufactured, here's a quick tour for you.

If you'd like to download a license plate font onto your computer, you can find one here. 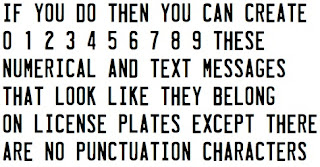 I've been working on this post for two days, and it's starting to get to me. If I don't take a break from these license plate fonts soon, I'm going to need: 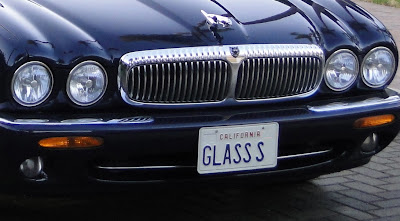 Posted by Excelmathmike at 11:37 AM