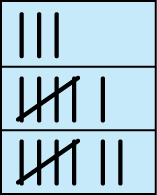 He's talking about a specific job - taking the count of work done and recording it on a tally.  We teach how to make a tally chart in 2nd grade Excel Math.

In the evolution of math language, we first counted aloud, then displayed (or calculated) on our fingers, then learned to tally, or display our count in some physical format. Eventually, much later, we used written numbers.

But tallies aren't just cave-man stuff; they were used into the 1900's for certain purposes.


A tally has several advantages over the oral statement of a number, or the finger display of a number. Most importantly, if carved it was long-lived, so you didn't forget your count. And if done correctly, the tally could be shared, so both parties in a transaction could each have a record - thus reducing conflicts, fraud and/or creative accounting. 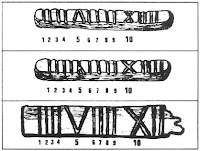 This illustration shows how numbers were carved in a sticks. These tallys were used to keep track of debts, and the depth and/or width of the notch could represent a debt. The deeper the notch, the deeper the debt.

How would you carve I owe you for a chicken dinner and a beer ?

A double or split stick was used to give each side a record of the debts.

As you can see here, the units of credit or debt are indicated by the depth, width and angle of the cuts in the tally sticks. 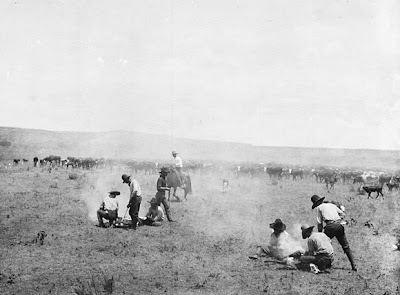 I found the term Tally Man used in a description of cowboys branding cattle. Lots of action, hooves, dust, ropes, smoke, crying calves and in the midst of it all, the tally man was keeping track of the total. You can see him walking from left to right, in the middle of the photo.

Our local newspaper carried a story this weekend about women working in tuna canneries in San Diego. Each cannery worker had a card on her back. Each time a tray of packed fish was completed, the boss (tally man) punched a hole in her card. At the end of the day it was turned in and the worker collected payment.

It looks like the woman on the left side has one of those cards on her shoulder. 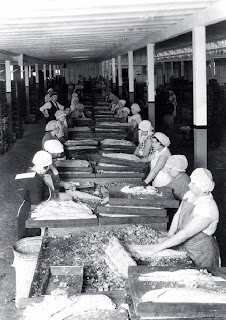 Posted by Excelmathmike at 9:33 AM