Question 1 How long can we make a string of railway cars?

But if you want to know the reasons why, read on! 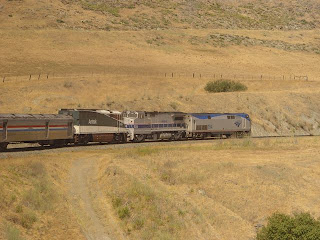 For example, can we handle 100 cars with 4 locomotives? Let's assume: 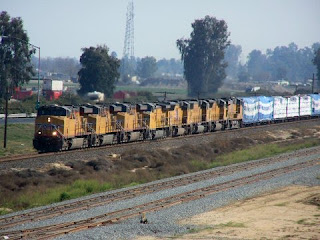 Air Brakes
On a train the brakes set when pressure in the air brake system drops. That means if you have air leaks or a car breaks free, the cars will stop.

When a long bunch of cars ( 1.5 miles or 9000 feet ) are hooked up, enough air escapes from the connections that it's impossible to move them reliably. 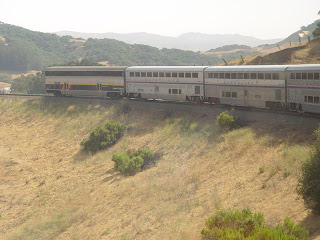 Terroir
This is a French term that wine enthusiasts use to describe the complex interactions of location (soil, sun time, water, etc.) on a wine.

I'm using it here because a combination of the same sorts of things affect a train. Hills, valleys, curves, wind, weather and track all influence the total length of a train.

In addition, the train usually shouldn't be longer than the siding that allow it to pull off so other trains can pass.

Question 2 Why does a train need power in both front and back?

Because train engineers have learned (the hard way) if you put all the power in front and try to pull a long train around a curve, you can pull it straight across the gap and into a valley or lake!
Posted by Excelmathmike at 10:33 AM