Which Center of the United States?

I saw a play recently at Lamb's Players Theatre, entitled Leaving Iowa. One of the scenes discussed the "Center of America", which is outside Lebanon, Kansas. But it turned out the Kansans disagreed with each other on where it should be.

Thinking math, I wondered, How did they find the center(s)?

It's not so easy to do with a country as large as ours. Here are some alternatives:


WAYS TO FIND THE CENTER

1. One story says the surveyors made a cardboard replica of the country, glued a map to one side and balanced it on a stake. The center was noted and that was it. It appears they wanted to find the centroid, or the center of mass of a planar region - where it would balance if made of a flat material of uniform density. To do it mathematically takes serious work. Here: 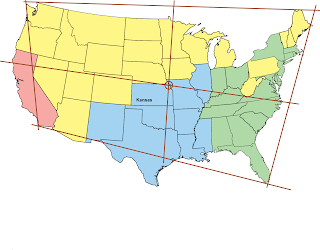 Measuring the actual borders and finding the center point is a lot harder. Do you use low or high tide? What about rocks, inlets, bays and islands? Let's show both the coastline (no little details when measuring) and then the shoreline (every little curve and bump)

Just find the middles and connect the dots.

3. As an alternative approach, we could find each of the corner points (NE, SE, SW, NW), draw lines between the opposite corners, and make an X in the middle where the lines cross. But where exactly are the corner points? I'll spare you the details. Here I did it visually with lines. You can see there are issues with the corner point in Maine. 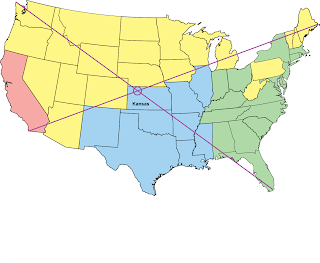 The problems with these two criss-cross solutions are many. First, the US is not flat, it's on a curved globe. How do we account for that? Second, what about the water? Do we go to the edge of the continental US or do we include our territorial waters? Do we "round off" any inlets or bays? Skip islands like Santa Catalina or the Florida Keys?

4. If you look for the center using your browser and Google's map, zoom in all the way and you'll be in a field near Coffeeville, KS. It's said to be an arbitrary choice. The center shown by the separate Google Maps software is in Lawrence, KS instead - allegedly because a Maps executive went to school there...

OTHER KINDS OF CENTER

5. The geodedic center is where all the surveyors assume the center is. It was chosen in 1891. The point didn't have to be the "real" center. It's just a defined spot from which everyone starts as they survey the land. It's in Osborne, Kansas.


6. What about finding the population center, the economic center, the etc. center? If this intrigues you, check out this report from a college calculus class.

When Hawaii and Alaska attained statehood, the geographic center moved out of Kansas up to a field outside Belle Fourche, SD.

Of course, the population center moves, whenever enough of us do.

It would be safest to say the center is in the middle of the country, ok? 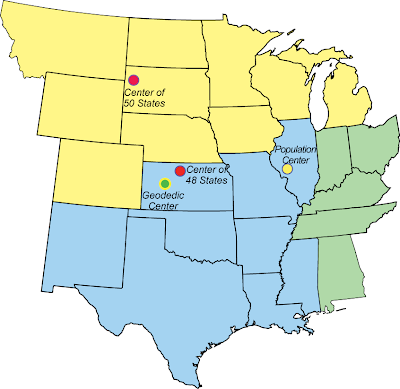 Posted by Excelmathmike at 9:25 AM