The sky is falling!

And I don't mean Chicken Little (Chicken Licken, Henny Penny) or lots of baggage is falling from the sky. I mean the prices of airplanes are plummeting.

Let's see if some graphs can demonstrate what's going on.

During my publishing career I've worked with several publishers of automotive price guides in the US and UK - Edmunds' and Glass's Guide Service. We took the original sales price of the car and plotted its decline on a curve over time,  showing the effects of depreciation, market opinion, and external events (gas prices, tax, etc.) We tried to predict the eventual value of the car, to help our subscribers make leases or loans.

VEHICLE DEPRECIATION
Here's a chart showing two vehicle declining in value from $30,000 to $10,000 over a 5 year period. 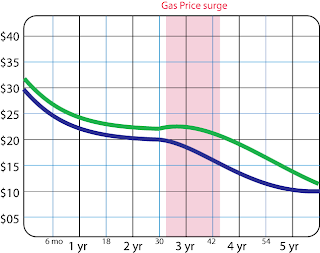 I made this up; they are not real vehicles. But the numbers are typical. Notice the red band shows an external factor (high gas prices) that have driven the value of one car down and the other car up.

Which one do you think has the better fuel economy? I know I gave it away using the color green but I couldn't help myself.

My friends used to say that we maliciously conspired to lower the value of their cars, causing them to lose money. Sorry. That's not how it works. We were behind the curve most of the time, trying to catch the falling prices.

There are similar information sources for aircraft values. The forecasters consider age of an aircraft (not mileage), economic conditions, and production of new aircraft as the main input. But airplanes don't wear out as quickly as cars do, nor are there very many - just a few thousand total in the world.

I saw these shocking figures in the Financial Times this morning. And we thought car depreciation was bad! Just switch the units from tens of thousands to tens of millions, and there you have it. 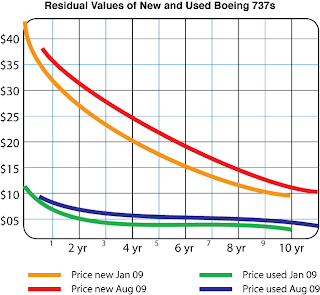 Notice the nearly vertical curve in the orange line, reflecting the fact that a new plane costs 7% less now than it did in January. The nearly-new plane is worth less than a brand-new one, so it drops even faster than it would have otherwise. You could lose $10 million in value in a few months ...

I know I can't afford a $115,000 monthly payment. But a busy airline (rare these days) or a careful and prudent business with a bit of cash can find bargains.

There seem to be about 1300 large airplanes just sitting around at the moment. In case you want to have a look or kick the tires of some soon-to-be-scrap aircraft, click here. The bottom IS falling out of them!

Posted by Excelmathmike at 9:24 AM