Many Miles, To Go

Most people in the USA know a mile is 5280 feet. We memorized it long ago, when we were in elementary school. It's equivalent to 1.6 kilometers. Of course, I'm talking only about a statute mile, defined legally by Queen Elizabeth I and the English Parliament about 400 years ago.


Another unit of distance is called a nautical mile, which is 15% larger (6076 feet, 1.15 statute miles, or 1852 m). This mile is equal to the distance of 1 minute of arc along any meridian (a line around the earth going through the poles).

(I realize this introduced the units of degrees, minutes and seconds of rotation, which we'll have to deal with another time!) 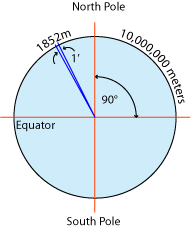 Does this diagram make it more clear? Sometimes a picture is worth 1000 words. We use nautical miles for navigating ships and airplanes because it's related to the size of the earth rather than the length of a foot. It's much easier for calculating distances on navigational charts.

These units are the most frequently used miles, but when we look back in history we find that the Romans started using a mile several thousand years ago. It meant 1000 paces (they defined a pace as one step with each foot; about 5 feet) thus a Roman mile was 5000 Roman feet.

The term metric mile is sometimes used in athletic competition, and it refers to a 1500 meter race (about 4920 feet).

We only teach the statue mile and nautical miles in Excel Math.

Our final definition today is the country mile. Let's put the definition in the form of a question:

Q. How far is a country mile?
A. Same as a city mile except there are no convenience stores along the way.

Ha ha ha. It really means a long, but undefined distance.
Posted by Excelmathmike at 9:59 AM