Kon-sti-tu-shun. Con-sti-tu-tion. A written set of rules for a government. These rules keep the branches of the government in balance and balance the government's rights with those of its citizens.


We the People of the United States, in Order to form a more perfect Union, establish Justice, insure domestic Tranquility, provide for the common defense, promote the general Welfare, and secure the Blessings of Liberty to ourselves and our Posterity, do ordain and establish this Constitution for the United States of America ...
and it goes on for quite a while.

Constitutions establish valid means of changing the government over time, such as voting in new leaders, establishing new rules via a legislature, etc. Many constitutions say a few of their rules are unmodifiable: the dignity of its citizens (Life, Liberty, Pursuit of Happiness), the citizenship of its leader, and so on. Of course, these rules can always be changed by a revolution or takeover from outside, or declaration that an emergency demands temporary suspension of the rules.

Perhaps due to a lack of education, I have assumed that a constitution is the foundation of every good government, except dictatorships where the dictator simply says "Let's do it my way. Now!"

If this kind of thing appeals to you, here is a website with constitutions from every country.

But reading this week, I learned that not all democratic countries have written constitutions.

Countries without any written constitution - Israel, New Zealand, United Kingdom
Oldest surviving constitution - the sovereign state of San Marino; written in 1600
Longest constitution (most words) - Yugoslavia (now gone)
Most emergencies causing suspension of constitution - Argentina did this 52 times in 150 years
Most recent constitutions -Thailand (18 different ones since 1932; including 11 coups). For more details, see the chart below, created by Patiwat Panurach. 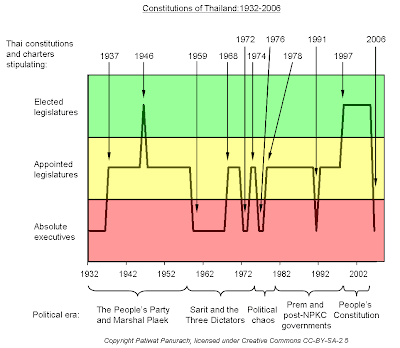 Who would have thought you could get a graph out of a constitutional crisis, eh?

One of the UK's elected leaders recently proposed they “consolidate the existing unwritten piecemeal conventions that govern much of the way central government operates into a single document.” Given the successful history of UK parliamentary procedure, I think the odds are slim to none, and he'll be voted out.

PS - Today is the anniversary of the day Abraham Lincoln was shot in 1865. It was the first time a US President was assassinated. 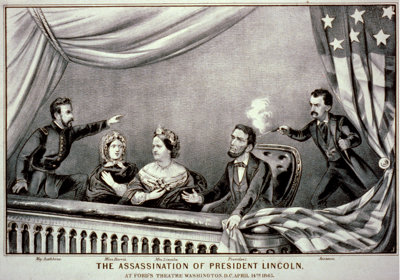 Posted by Excelmathmike at 9:53 AM