Run with the Renminbi

A hard word to say! It's a Chinese word that means the People's Currency. This currency was first issued around 1949 by the People's Bank of China. Its currency symbol is CNY but it is also abbreviated as RMB.

I've visited China three times totalling about 10 weeks, and we didn't use that R word while working, talking business or sight-seeing. We used the words yuán (yen) and the jiǎo (1/10th of a yuán). Yen means round and you probably know it's also the word used for Japanese currency.

Just as we have slang terms (calling a dollar a buck) the Chinese have multiple nicknames for their money too -  piece and feather are two of them. 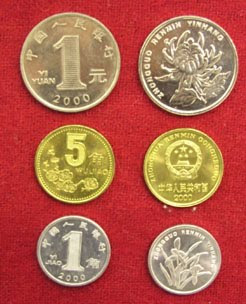 The picture shows one yuán at the top, a half-yuán in the middle, and a jiǎo  (dime) at the bottom.
Click on this link to see more Chinese coins and bills
You may have seen lots of hollering in the news about the relationship of the dollar and the renminbi. Some people want the renminbi to be valued higher relative to the dollar, so that American goods will be cheaper for the Chinese to buy, and their goods will be more expensive. For a long time the exchange was about 8 to the dollar. Now it's about 6.8 to the dollar.

[NOTE - These arguments go on constantly about many currency pairs - the Euro vs Pound Sterling vs US Dollar vs Swiss Franc, etc.]

There are lots of viewpoints on this and we can't resolve them here. But I can say that the exchange rate in China used to be very different for a tourist than for a business. I mean the BLACK MARKET where you got a completely different exchange rate if you did money-changing on the street rather than in a bank. This situation exists in many countries.

The Chinese renminbi is accepted in some places outside mainland China, such as Mongolia, Thailand, Cambodia, Laos, Pakistan, Taiwan, Hong Kong, etc. - similar to how the US Dollar is accepted when Americans buy things along the Canadian or Mexican borders.

You need a little bit of math to work out exchange rates and it helps to have practice. Because we live near the US-Mexican border, lived in the UK for a year, and worked in Canada for 4 years, I can do most exchange rates in my head.

Years ago our whole family took a big vacation together and went to Canada. In Vancouver, my sister-in-law offered to pay for lunch. She went to the register, and came back to the table thrilled that the Canadian cashier took her US dollars "straight across" or 1:1.
At the time, a US dollar bought about $1.30 Canadian. Why was the Canadian merchant so obliging? Let's look:

If you want a hard mental challenge, go into a country, buy some of their currency, then try to re-use that money in a third place while keeping some sense of its value. This is not calculus or rocket science, but it will definitely have you counting on your fingers in the Hong Kong duty-free shop!


[Yes, the money-changers profit most from cross-border, cross-currency wheeling and dealing!]
Posted by Excelmathmike at 11:30 AM